Andalusian by birth, the poet, philosopher and Sufi al-Shushtar­ī spent most of his life travelling in North Africa, including Egypt where he ended his days. He became a controversial figure in orthodox circles on account of the resolute form of pantheistic Sufism which he had adopted from his mentor, the philosopher Ibn SabꜤīn. Though descended from a well-to-do family, he chose to live a life divested of material possessions and championed the cause of the poor. He is best known for his lyric poetry composed in Andalusian colloquial Arabic which combines simplicity of diction with great expressive depth. Many of his work were set to music and are performed to this day, particularly in Moroccan Sufi circles. The poem reproduced here differs from his other works in being a full-scale qasida composed in classical Arabic.

The Nūniyya (poem rhyming on the letter nūn)

As noted by Sperl in his chapter ‘Stages of Ascent: Neoplatonic Affinities in Classical Arabic Poetry’ (FoI 93-130), al-Shushtarī’s Nūniyya can be read as a Sufi recasting of the tripartite qasida form. The latter traditionally begins with mourning over unfulfilled love, continues with an arduous journey and ends with the praise of a patron or tribe. In the Nūniyya the unfulfilled longing at the outset of the poem concerns a form of union so absolute that the distinction between lover and beloved, subject and object is obliterated and the two become one. The first line describes it as a state of being ‘beyond paradise’ which conjures up the ‘transcendent union’ Plotinus evokes in passages such as the following:

‘the seer does not see and does not distinguish and does not imagine two, but … has come to belong to that and so is one, having joined, as it were, centre to centre’ (VI 9 [9] 11).

Al-Shushtarī points out, however, that the attainment of this longed-for oneness is exceedingly difficult for it involves a paradox: ‘those who reject multiplicity are themselves the rejected’ (line 6).

At this point of discomfiture, the journey section of the poem begins, leading the traveller through deserts replete with ‘strive, toil’ and ‘great horrors’. The principal culprit is identified right at the outset: it is al-Ꜥaql, reason or intellect. As the poem makes clear, the term is to be understood as denoting both the intellect of the individual human and the Universal Intellect which governs the cosmos. Both share the quality of being progenitors of multiplicity:  of perception and experience in the individual human (lines 7-23), of diversity in the manifestations of the universe at the cosmic level (lines 24-38). At both levels multiplicity is illusory and misleading for it disguises the underlying oneness of all. Language itself provides the proof:

Al-Shushtarī concludes that humans are, like silkworms, enveloped and imprisoned in a cocoon of multiplicity fashioned by the labours of their rational minds (line 38). His critique of the intellect as obstacle to the apperception of divine oneness recalls a parallel argument repeatedly put forward by Plotinus:

Plotinus, though, makes a distinction between the process of reason (logos) and the Intellect (nous) as such. The latter, despite being the archetypal progenitor of multiplicity, also represents the faculty by recourse to which the human mind may distinguish the pathway to the One, with the proviso that Intellect itself must be transcended if union is to be achieved. Without making such a terminological distinction, al-Shushtarī, too, concedes that the intellect – presumably by comprehending, and reflecting on, its own fallacy, in the manner the poet himself undertakes in the course of his journey – may turn out to a force for good:

How often it destroys the bystander, and how often it rightly guides the traveller,
How often it reveals wisdom and how it enriches the poor (line 39).

This insight marks the beginning of the third and final part of the poem. Instead of praising a patron or a tribe, the section is dedicated to the spiritual forbears of al-Shushtarī all of whom are shown to have both wrestled with, and been aided by, intellect in their search for ecstatic communion with the divine essence. The list begins with the Hermeticists and leads, via Socrates, Plato and Aristotle, to the Sufi luminaries of al-Shushtarī’s time, including al-Ḥallāj and Ibn ꜤArabī. The concluding section thus bears eloquent witness that al-Shushtarī felt himself to belong to a theosophical tradition which stretches back to antiquity. 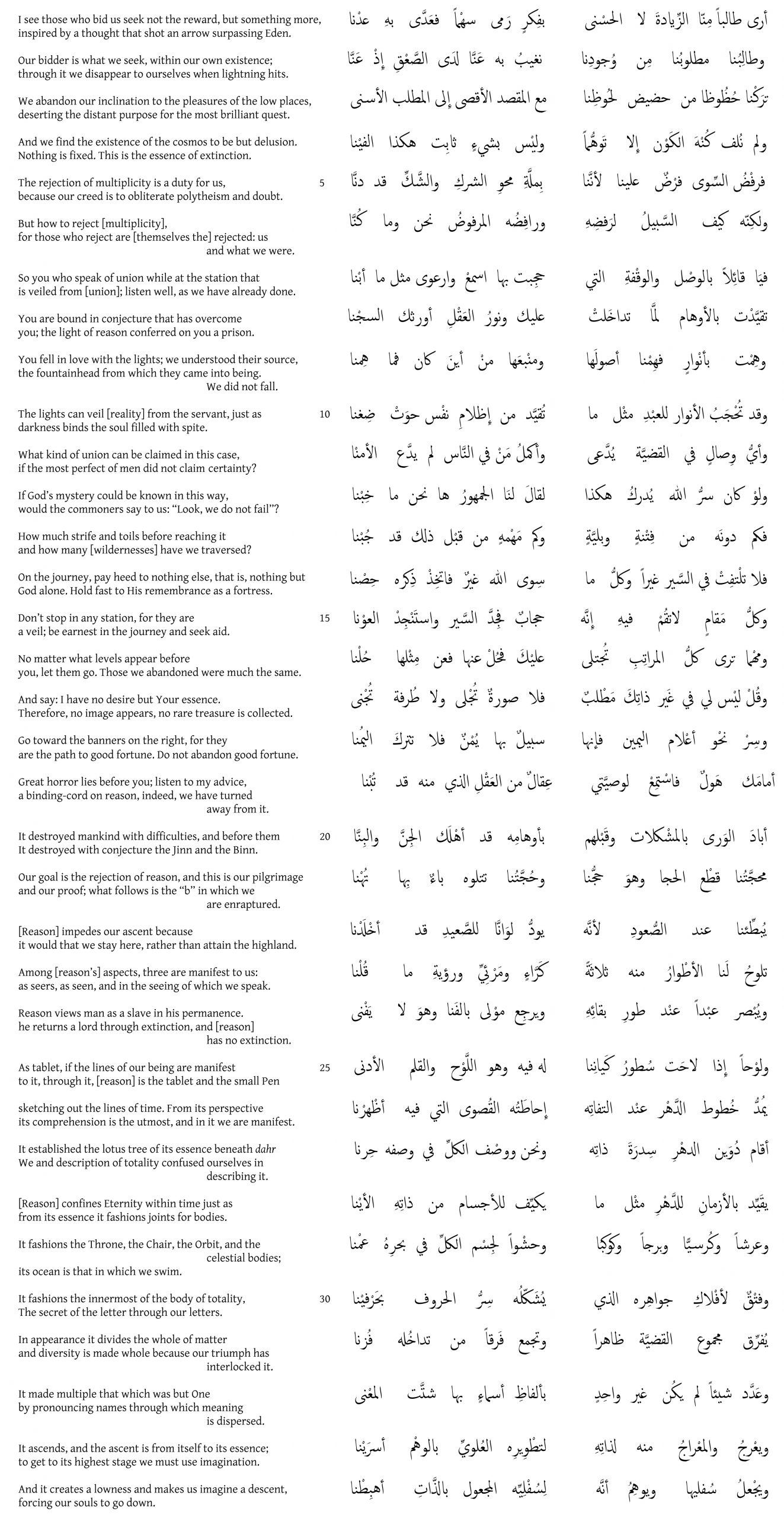