Al-Ḥallāj, a major poet, writer and preacher of Persian descent, is one of the most influential exponents of the Sufi tradition. He resided first in Basra, then in Baghdad and is said to have travelled widely, including as far as India. His public pronouncements attracted the hostility of his peers who accused him of divulging or misrepresenting esoteric doctrines, though later Sufi luminaries rehabilitated him and portrayed him as a saint.  The authorities in Baghdad viewed al-Ḥallāj and his widening circle of followers with suspicion. He was arrested and, after a long imprisonment, brutally executed on 26 March, 922. In order to expunge his memory, his body was burnt and the ashes scattered into the Tigris. Most of his numerous writings were lost or destroyed. What remains are collections of sayings and narratives, some visionary and enigmatic prose writings on the nature of divinity entitled Kitāb al-Ṭāwāsīn, and a number of mostly short poems preserved in different sources. The latter were collected into a now famous Diwan by the French scholar Louis Massignon (1883-1962) who devoted a life-time’s work to resurrecting the memory al-Ḥallāj and helped to make him a key figure in the modern Arabic literary canon.

The primary source of authority for al-Ḥallāj’s thinking is the Qur’an. There are also a number of striking points of convergence between his pronouncements and the Neoplatonic tradition, as observed most recently by Saer El-Jaishi in his study Early Philosophical Ṣūfism; The Neoplatonic Thought of Ḥusayn Ibn Manṣūr al-Ḥallāǧ (New Jersey, Gorgias Press, 2018). Three are of particular note. The first is a shared conviction that God is utterly unknowable and can only be described if at all by what He is not. It amounts to what has been termed a ‘negative’ or ‘apophatic’ theology to which al-Ḥallāj’s writerly genius has given singularly powerful expression in a confession of faith cited in cardinal Sufi compendia. Secondly, in parallel with the Platonic and Neoplatonic principle of Godlikeness as the highest goal of human aspiration, al-Ḥallāj famously claimed to have attained momentary states of union with the divine essence, as illustrated in his oft cited words ‘I am the Truth’ which, according to some reports, gave ground for his execution. The third notable point of convergence between Neoplatonism and al-Ḥallāj centres on the notion of love. Both conceive it as a primordial attribute of the divine essence, as illustrated in the poem cited here.

‘Love has always been’

As discussed by Alexander Key in his chapter ‘What are Neoplatonic Poetics? Allegory; Figure; Genre’ (see FoI, 131-2), this poem asserts the existence of love as a quality co-extensive with the Creator Himself who transmits it like a glittering fire to all he brought into being. Itself uncreated, love is the creative force that causes separate elements to fuse together into compounds that appear as one, like individual letters combined to form a word. The translation below skilfully transposes al-Ḥallāj’s alphabetic image into English with the example of the letters ‘f’ and ‘r’ in the word ‘fire’. In the Arabic text the idea is illustrated by recourse to the Arabic letters lām and alif which are introduced in the word talaʾlaʾ (‘to glitter’). Significantly the compound lām-alif is also the only ligature of two letters which the Arabic scribal tradition considers an independent letter-shape – and hence a unity – in its own right. Often counted as the twenty-ninth letter of the Arabic alphabet, the ligature lā means ‘no’ in Arabic and as such appears as the first word of the Islamic proclamation of faith (‘no divinity but God!’, lā ilāha illā Allāh). Read as a word, the unity of lām and alif thus asserts the unity of God by categorical denial of all otherness. It is, so the poem seems to suggest, a unity grounded in the fire of love. 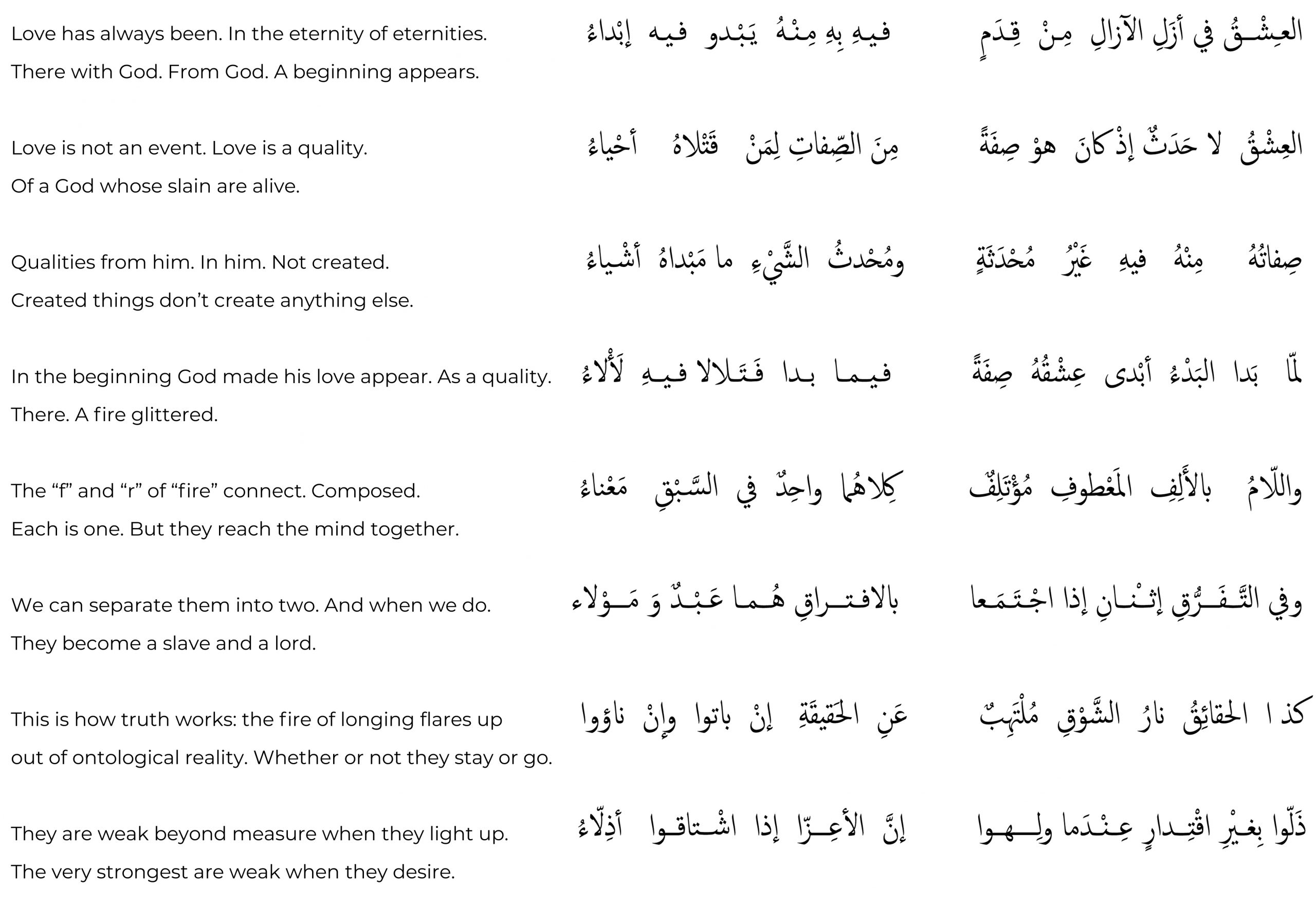 1. For sources and English translation see Carl Ernst (2018), Hallaj – Poems of a Sufi Martyr (Evanston, Northwestern University Press), 9. The book provides an excellent introduction to al-Hallaj and a translation of his poems.