Along with Jibrān Khalīl Jibrān (1883-1931), Mīkhāʾīl NuꜤayma was a particularly important and influential member of the group of Syro-Lebanese poets and writers active in New York in the first three decades of the 20th century. They are usually referred to as the Mahjar (émigré) poets. NuꜤayma  was unusual amongst these poets in that his exposure to European literature came via his knowledge of Russian, and 19th century Russian literature in particular. He had been a pupil in the Russian primary school which opened in his home town of Baskinta in Lebanon in 1899, and from there he went on to attend the Russian Teachers’ Institute in Nazareth from 1902. Between 1906 and 1911 he studied at an Orthodox seminary in Poltova in the Ukraine. He migrated to the USA in 1912, and joined the Mahjar group in New York in 1916. In part due to the influence of the writings of the elder Tolstoy, NuꜤayma  was strongly anti-clerical, and he also acknowledged the impact of the poetry of Mikha’il Lermontov, especially with respect to the Neoplatonic antithesis of body and soul. From the 1920s onwards, the poetry of the Mahjar was to have a seminal impact on the wider development of poetry in the Arab world, and much of the credit for this is due to NuꜤayma. His book of critical articles al-Ghirbāl/The Sieve appeared in Egypt in 1923 and led to debates on the nature and language of poetry, while his own verse became the subject of admiration amongst influential Arab critics.

As the poem probes the question voiced in its title, a deepening awareness arises that a secret kinship must exist between the human soul and the natural world. The shared element between them evokes the Neoplatonic notion of the ‘universal soul’ which governs all existing phenomena and explains the many-faceted guises the human soul can assume. The poem concludes by attributing this plenitude to a single source. The text is discussed in Robin Ostle’s chapter ‘Body and Soul in the Arabic Literature of the Americas’ (see FoI, 397-399). 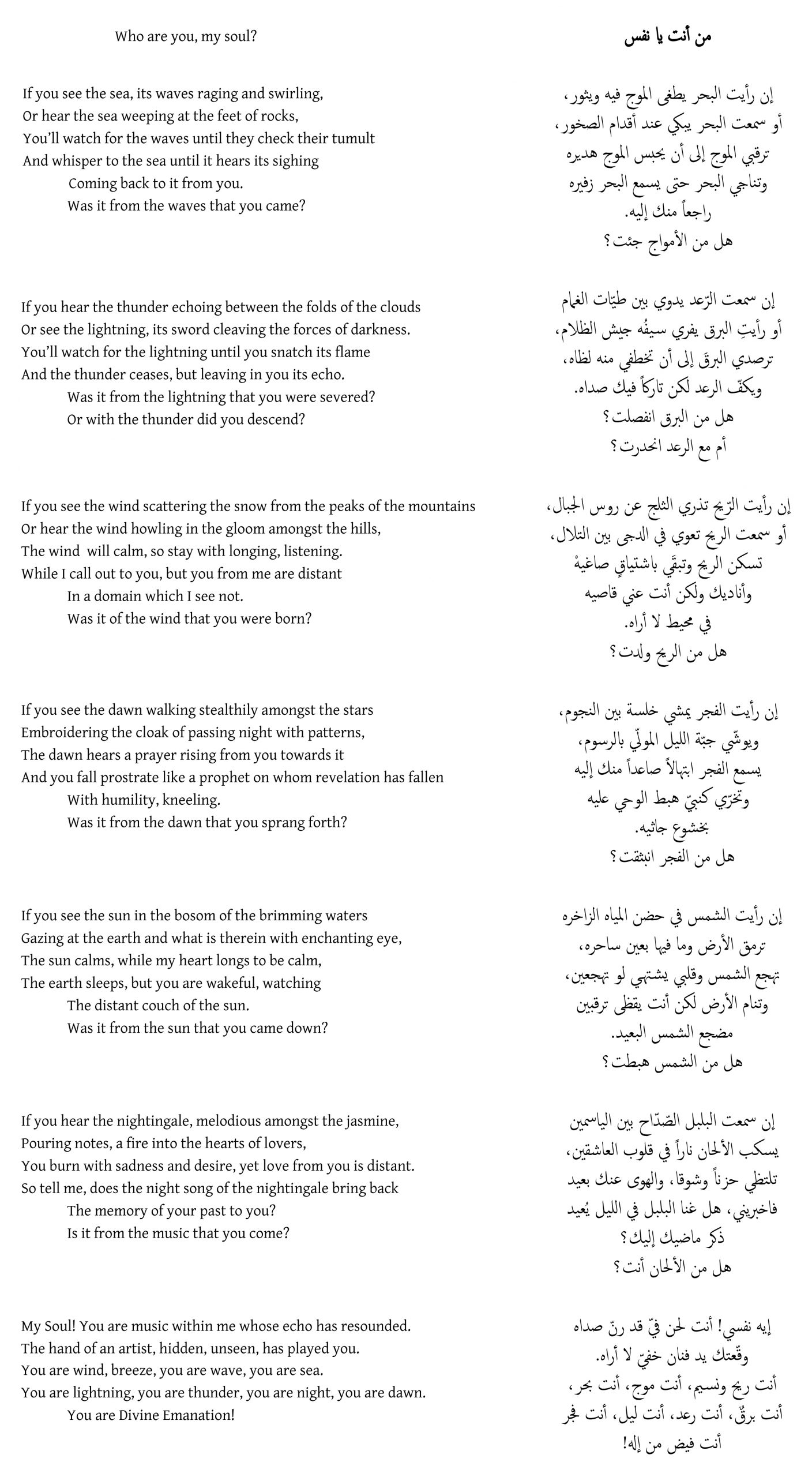 Mīkhāʾīl NuꜤayma (n. d.), Hams al-Jufūn (Dār Ṣādir, Beirut), 16-21. English translation by © Robin Ostle. [I am grateful to my colleague Geert Jan van Gelder for a number of corrections and suggestions which have improved this translation. —R.O.]