Ibn ꜤArabī is the most influential thinker of Islamic mysticism. He left behind some 350 works in prose and poetry which are of striking originality, variety and depth, and earned him the title ‘Greatest Master’ (al-Shaykh al-Akbar). Born in Muslim Spain, he spent much of his life travelling and teaching, first in North Africa, then in the Eastern Mediterranean and Anatolia, before settling in Damascus where, to this day, his tomb remains a shrine. He returned repeatedly to Mecca, which became the focal point of his travels. His first stay there in 1202-4 was, by his own account, transformational. At the foot of the Ka‘ba he met an unnamed youth who inspired him to write his most important work, the ‘Meccan Revelations’ (al-Futuḥāt al-Makkiyya), a comprehensive spiritual cosmology derived from the Qur’an and Muslim tradition to which he would devote some thirty years of his life. In the precincts of the Ka‘ba he also found love in his encounter with Niẓām, a beautiful and erudite Persian woman. She inspired him to compose his most famous set of poems, entitled ‘Translator of Desires’ (Tarjumān al-Ashwāq). It draws on the medium of ancient Arabic love poetry but aims for wider shores. In parallel with both the Sufi and the Neoplatonic traditions, it subtly interweaves sacred and profane love, as illustrated in the poem selected here.

O doves of the Arāk tree

The concluding verses of this poem are the most frequently cited words of Ibn ꜤArabī’s oeuvre, though their meaning cannot be fully grasped if read in isolation from the complex and multi-faceted progression of the work as a whole. The images are laden with esoteric meaning, as confirmed by the commentary which Ibn ꜤArabī provided for the ‘Translator of Desires’. The explanations he gives, however, tend only to deepen the mystery.

The most remarkable feature of the work is the reciprocity it portrays in the relationship between the poet-lover and his unnamed beloved whom the allusive language of the poem gradually reveals to be none other than the divine presence. The longing for it consumes and virtually obliterates the lover in the initial lines (1-5), whereupon a striking reversal occurs. Through loving it with such intensity, the divine presence has struck root in the heart of the lover and transformed it from a subject to an object of love. It has become a sanctuary tantamount to the Ka‘ba, and hence evokes an archetypal image of divine love: the vision of the Prophet circumambulating and kissing the sacred shrine (verses 6-9). At this point the reciprocity is inverted for the second time, and the poet-lover is once more seized with longing for the divine beloved who appears in the bewildering guise of a maiden-like gazelle grazing on the meadow of his inner fire (verses 11-12). But he is no longer the helpless victim he was at the outset. His heart having become, however briefly, a locum of divine immanence, he is able to grasp the sacred in all the manifestations it can assume: Jewish, Christian, Muslim and pagan. Underlying them all is the creed of love, which leads to the poem’s triumphant end (verses 13-16). In the concluding evocation of the great lovers of the past, the earthly and the heavenly are conjoined: though hierarchically distinct, sacred and profane love are images of each other. For a discussion of the poem in the wider context of Ibn ꜤArabī’s work and the Arabic poetic tradition, see Stefan Sperl’s chapter ‘Stages of Ascent: Neoplatonic Affinities in Classical Arabic Poetry’ (see FoI, 118-25). 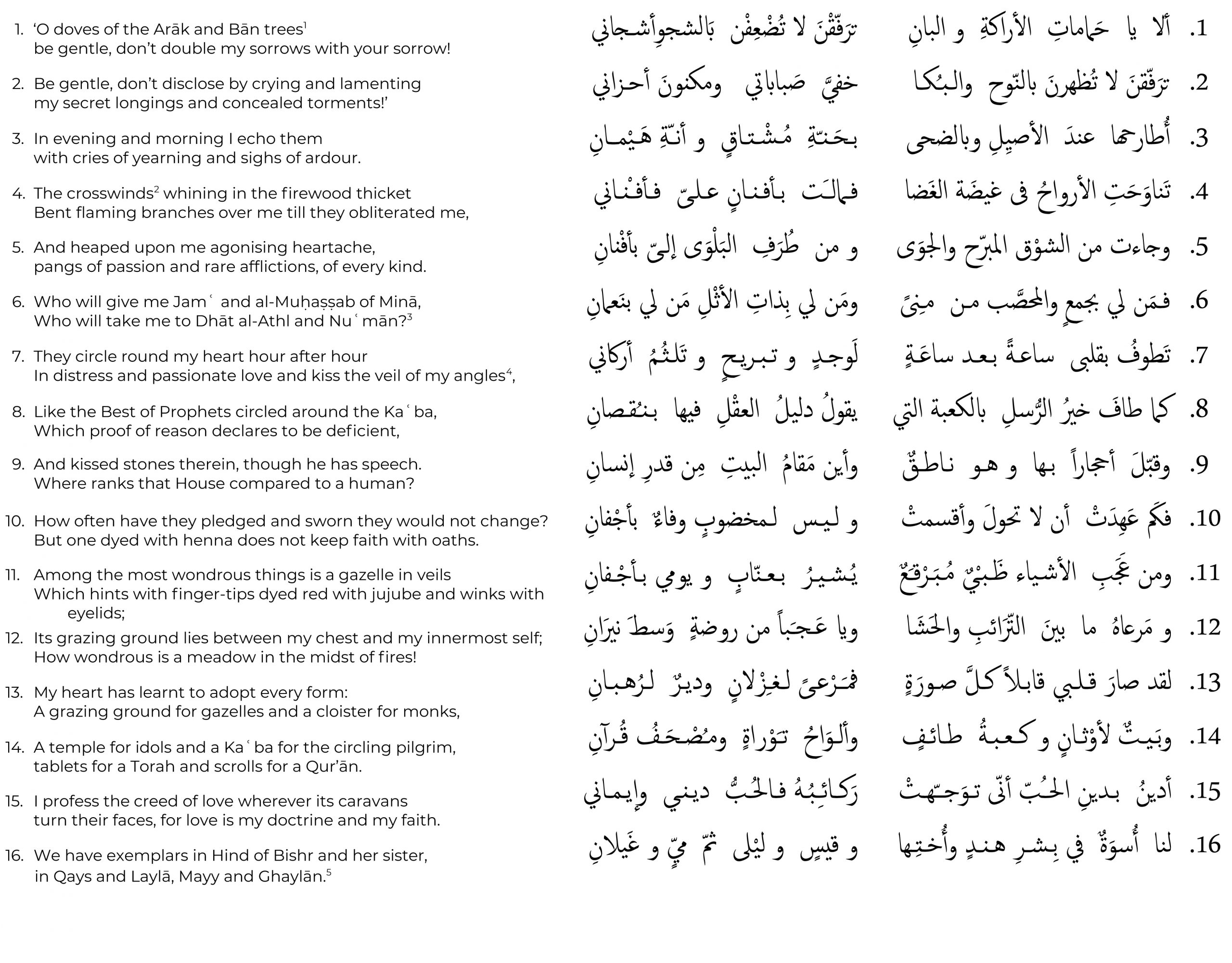 1. Michael Sells has identified the Arāk and Bān trees as the thornberry (or sprigberry) and moringa, and shown the associations they evoke with early Arabic love poetry (Journal of the Muhyiddin Ibn Arabi Society, Vol. X, 1991, 2-4).
2. The word arwāḥ also conveys the meaning of ‘spirits’.
3. Jamʿ and al-Muḥaṣṣab of Minā are locations associated with the pilgrimage to Mecca; Dhāt al-Athl and Nuʿmān are place names evocative of the meeting of lovers.
4. The word arkān (‘angles, corners’) evokes the Ka‘ba to which the heart has become a semblance.
5. Bishr and Hind, Qays and Laylā, Mayy and Ghaylān are pairs of early Arabian lovers whose tragic and unfulfilled devotion to each other had become legendary by the time this poem was composed. Ghaylān, more commonly known as Dhū Rumma, is a major early Islamic poet. The stories of Bishr and Hind, Qays and Laylā became subjects of Persian Sufi romances.