Ibn Sīnā, also known as Avicenna, was born near Bukhara in today’s Uzbekistan, then a thriving province at the North-Eastern fringes of the Islamic Empire. It had developed a rich intellectual and artistic tradition under the Samanids, a Persian dynasty which governed it under nominal Abbasid sovereignty. By his own account, Ibn Sīnā was a child prodigy who knew the Qur’an by heart at the age of ten and by the age of twenty had developed a thorough grounding in philosophy, science and medicine. Having become the physician of the Samanid ruler, he made eager use of the potentate’s well stocked library and turned himself into the polymath he was to become. He then embarked on a life of restless travel in search of patrons willing to provide him with the income and security needed to pursue his exceptionally prolific writing career.

His works include two multi-volume compendia, the encyclopaedic ‘Canon of Medicine’ (Al-Qānūn fī al-Ṭibb), and the ‘Book of Healing’ (Kitāb al-Shifāʾ) which is devoted to philosophy. Among his many shorter works, composed in both Arabic and Persian, are a number of allegorical narratives which give symbolic expression to philosophical ideas and demonstrate his skill as a creative writer. Aristotle was the principal influence on his thinking, but he was well acquainted with Neoplatonic ideas. He wrote a commentary on the Arabic adaptation of Plotinus’s writings which bore the erroneous title ‘Theology of Aristotle’. By drawing on these and other early sources, Ibn Sīnā developed an innovative synthesis of his own which made him the leading philosopher of the Middle Ages and earned him a lasting reputation in Muslim, Christian and Jewish circles.

The Ode to the Soul

This oft cited poem portrays the Neoplatonic trajectory of the soul in allegorical terms: its descent to earthly existence from its prior abode in the supernal realm, its painful sojourn in the confines of the body, and its eventual release and ascent to the higher spheres from whence it came. Since Ibn Sīnā’s Aristotelian stance was known to reject the pre-existence of the human soul, his authorship of the poem was called into question as early as the Middle Ages and has been much debated in recent times. In a detailed study of the subject, which takes account of Ibn Sīnā’s comments on Plotinus’s views about the soul as conveyed in the ‘Theology of Aristotle’, Toby Mayer argues that the poem should be understood as a figurative representation of ideas which may appear Neoplatonic but are interpretable in accordance with Aristotelian psychology. Furthermore, the poem’s subject matter closely parallels the ‘Epistle of the Bird’, an allegorical narrative whose authorship by Ibn Sīnā is not in doubt. Mayer therefore has no hesitation in ascribing this poem to the pen of the philosopher. (See Wilfred Madelung & Toby Mayer (2016), Avicenna’s Allegory on the Soul, An Ismaili Interpretation, Arabic edition by W. Madelung, transl. and intr. T. Mayer (London, I.B. Tauris), 31-56.)

What makes it remarkable as a work of literature is the manner in which certain motifs of classical Arabic poetry which date back to pre-Islamic times are reinterpreted to convey a philosophical psychology. A prime example is the abandoned campsite motif which also introduces Abū Tammām’s ode cited in this Anthology. Traditionally it is a place of sorrow which arouses memories of an ancient love forever lost. As though capturing the deeper meaning of this scene from a Neoplatonic perspective, the campsite in this poem signifies the wasteland of earthly existence altogether, while the mourned-for love stands for the lost bliss of the soul’s primordial home. The dove whose cooing had long been a poetic image of the lover’s complaint here comes to represent the soul which pines for its home whilst being confined in the body, like a bird in a cage. In the old poems, the campsite scene ends with the lover resolving to depart on a journey to new horizons. Here, too, the journey theme appears, but it is a terminal move, representing death as the only gateway to the longed-for return. The poem ends with reflections on the meaning of the soul’s ordained descent to the earthly sphere.

The work has been much discussed and transmitted in different versions. References to the relevant literature are given in the above cited publication by Madelung and Mayer which also includes a detailed commentary by the Isma’ili writer and poet ꜤAlī ibn Muḥammad ibn al-Walīd (d. 1215). As discussed by Robin Ostle in his chapter ‘Body and Soul in the Arab literature of the Americas’, the poem made a lasting impression on the modern Arab writer Khalil Gibran (see FoI, 393-4). 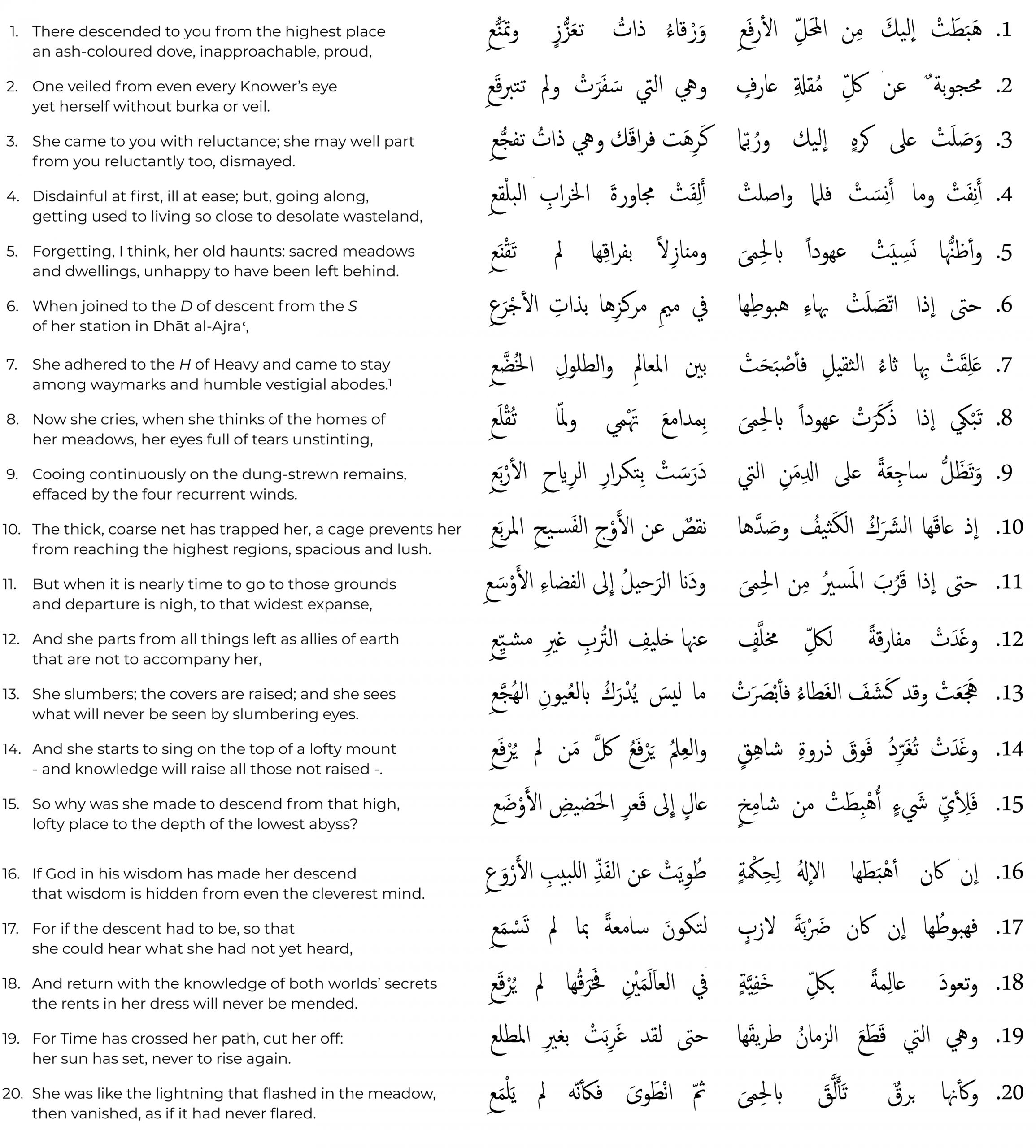