Eugenio Montale was born and grew up in Genoa, spending his summers in the family villa at Monterosso, the most northerly of the Cinque Terre on the steeply sloping coastline of Liguria. His response to this landscape created the initial form of a sensed earthly entrapment and desire for transcendence, a desire often focused from the first on representations of inspiring women figures. His first collection, Ossi di Seppia (Cuttlefish Bones), published in 1925, draws its inspiration from this hard landscape, experienced mostly under heat, and already touched with a pessimism about existence, a male di vivere, that further impelled the search for significance, a search which vividly evokes the imagery and conditions of his surroundings but seeks to reach through and beyond them.

This widely appreciated first book was followed in 1939 by Le occasioni (The Occasions) whose largely Florentine and Tuscan landscapes, though more various and wide-ranging, are at least as imprisoning thanks to the regime under which they were written. Once again, a muse figure, most frequently Irma Brandeis, to whom the volume is dedicated, appears to offer a way out of this political and spiritual enclosure. His third collection, La bufera e altro (The Storm and others) was published in 1956 and brought to a close this phase of his poetry, taking the themes from his earlier collections into the experience of the Second World War and converting Brandeis from an actual person into a form of visiting angel.

The various volumes of Montale’s later poetry were initiated with Satura (1971), a collection including the two series of ‘Xenia’ poems in which posthumously his wife, Drusilla Tanzi, becomes the distantly inspiring muse-figure. In this and subsequent volumes he largely abandoned the highly wrought indirection of his first three books in favour of an informal and ironical mode, Montale’s oeuvre also includes a volume of translations, a collection of short fiction, some travel writings, and a large amount of criticism devoted to both literature and music. After initially training to be an operatic tenor, the poet worked through the 1930s as a librarian in Florence, a post he would be obliged to resign under pressure from the Fascist regime. After the Second World War he was employed as a literary journalist in Milan. Eugenio Montale was awarded the Nobel Prize for Literature in 1975.

‘I limoni’ (The Lemons) is the second poem in Ossi di sepia and exemplifies the sense of enclosure, the presence of a everyday object that focuses exploration, the search for significance and its partial frustration, ending memorably with the recovery of further opportunities to aspire. ‘Nuove stanze’ (New Stanzas), set in Florence, is from Le occasioni and brings together the poet’s feelings for Irma Brandeis and her mysterious contribution to overcoming of the oppressive atmosphere in the city during the latter years of the 1930s. From the symbology of the spiralling smoke in the first stanza it rises by stages to effect its transformation as a contribution to the survival of independent agency within a context aiming to suppress it. ‘La Primavera Hitleriana’ (The Hitlerian Springtime) derives from the parade made by Mussolini and Hitler through Florence on 9 May 1938, but the poem was only included in La bufera e altro (The Storm and others). It expresses more directly than would have been possible at the time Montale’s opposition to the regime and calls upon the spirit of his American love to intercede against the evil present. ‘Iride’ (Iris), from the same collection, evokes his pre-war love in her new guise as a ministering angel to aid in the post-war spiritual reconstruction of his country. These poems are discussed in Peter Robinson’s chapter ‘An Equivocal Echo: Eugenio Montale’ (see FoI, 356-72). 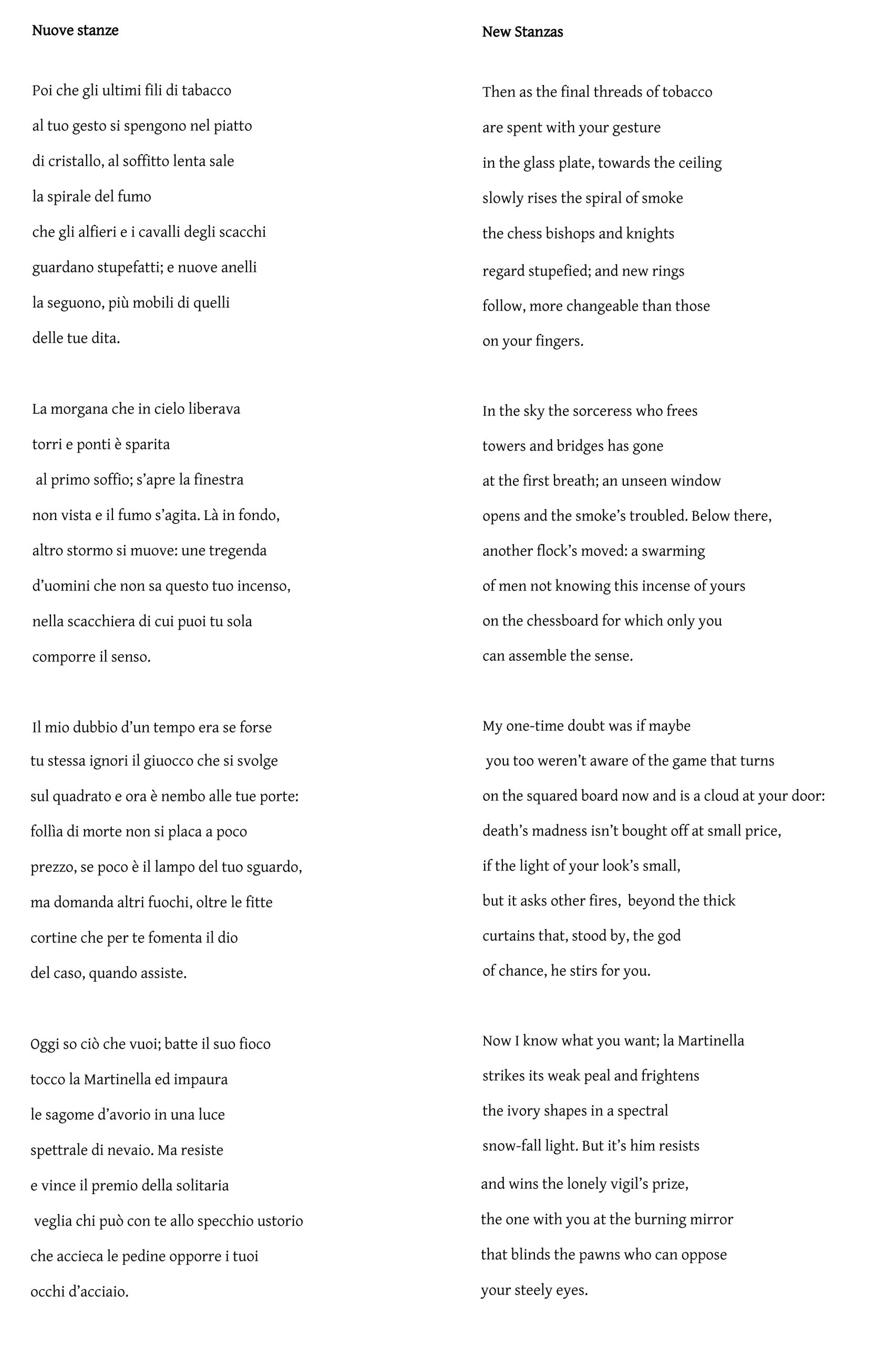 The translator would like to acknowledge earlier renderings of these poems by Montale, in particular those of Bernard Spencer, Edwin Morgan, and Jonathan Galassi, whose versions have been consulted and much learned from even when bringing together other words, phrases and rhythms for these attempts at the art of the impossible.