Kostis Palamas was born in Patras in the Peloponnese, brought up in Missolonghi, the scene of Byron’s death, and educated in Athens. Self-described as a sedentary poet, he devoted much of his poetry to that city, once the home of Plato; yet he is also a poet obsessed with the mythopoetic capacity of poetry, struggling as he does to reconcile the ancient Greek and Christian elements of the modern Greek cultural inheritance.

Two Extracts from The Emperor’s Reed-Pipe (1910)

Palamas’s prestige as the (unofficial but widely acknowledged) national poet of Greece in his own time has tended to obscure the tensions which animate his best work. These are apparent in what the poet prized as his summa, the epic in twelve books best known in English as The King’s Flute, but more accurately rendered The Emperor’s Reedpipe. Centred around the Byzantine emperor Basil the Bulgar-Slayer (958-1025), the narrative gives the modern poet the opportunity to explore the Platonic inheritance of Athens and its banishment by the Church. In the short extracts below, we begin with the Acropolis and the Virgin Mary as its new dedicatee, supplanting Athena, and then move to the figure of the Neoplatonist Proclus. The texts are discussed in David Ricks’s chapter ‘Neoplatonists in modern Greek poetry’ (FoI, 456-460) which owes much to Anthony Hirst, God and the Poetic Ego (Bern: Peter Lang 2004). 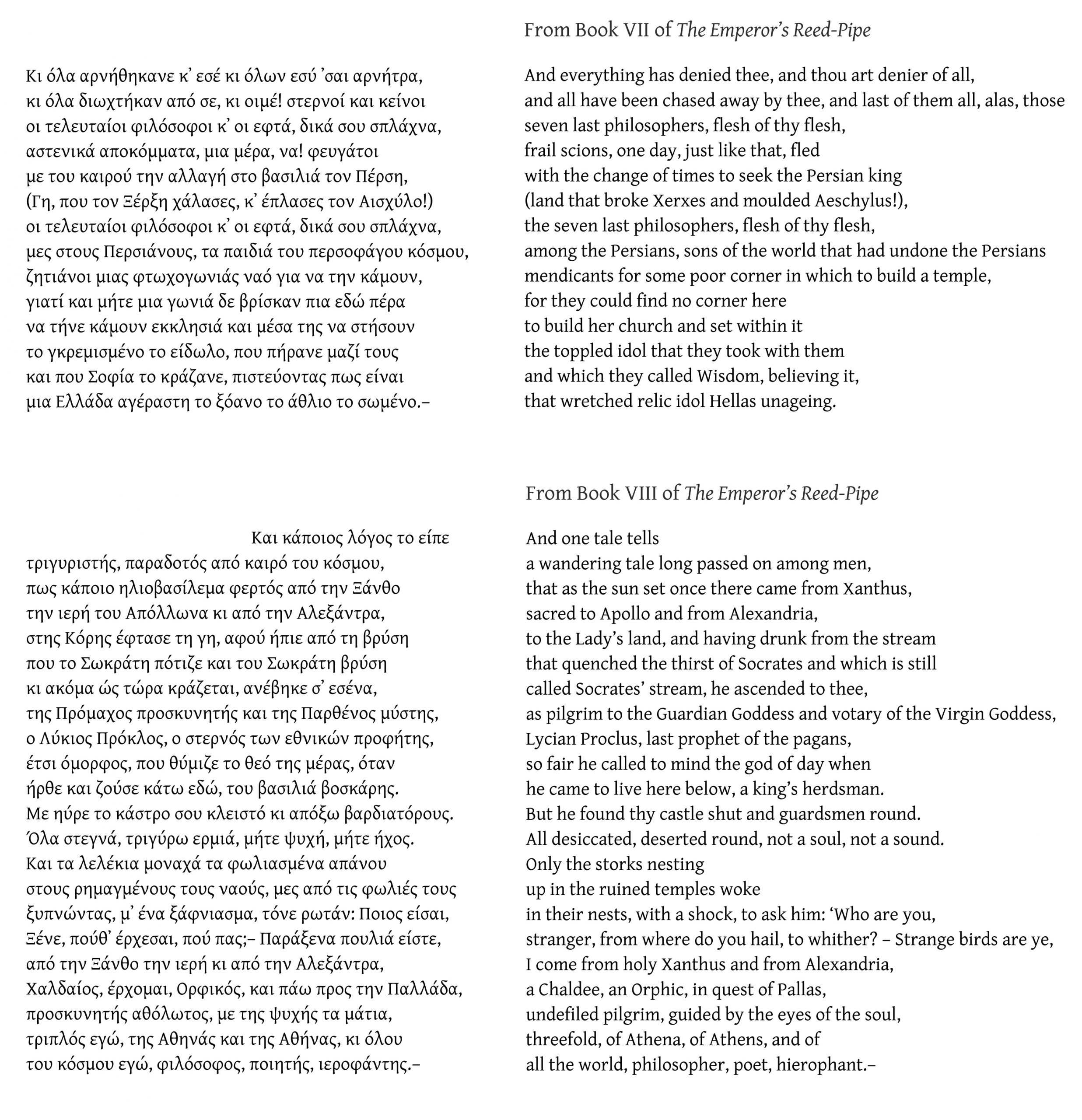 Not long after completing The Emperor’s Reed Pipe, Palamas returned to another key figure of Neoplatonism, this time as the translator of Leconte de Lisle’s ‘Hypatie’. In this perfervid poem, first published in 1847, the French poet had raised his voice on behalf of the Neoplatonist philosopher Hypatia, who fell victim to a rabble of Christian zealots in Alexandria in AD 415. Much influenced by French poetry and much taken with ‘the march of mind’, Palamas chose to translate Leconte de Lisle’s poem for the fifteen-hundredth anniversary of Hypatia’s murder. The versified translation was written in 1915 but was published in book form in Music Transposed (1930).  For a discussion of the poem see David Ricks’s chapter ‘Neoplatonists in modern Greek poetry’ (FoI, 456-7).