Claudio Rodríguez Fer is director of the Valente Chair of Poetry and Aesthetics and co-director of the journal Moenia of the University of Santiago de Compostela (Spain). He has taught at the City University of New York, Paris Est, South Brittany, and Upper Brittany where he was awarded the Doctor Honoris Causa. He has published, spoken, and read his work in numerous parts of Europe, America and Africa, and coordinates the publication Unión Libre. His critical work includes books and editions on Dostoevsky, Machado, Borges, Neruda, Cernuda, Goytisolo, Valente and numerous Galician writers.

His work has been translated into numerous languages (65 in http://www.acabeleira.com/a_cabeleira_multilinge.html). English translations of his work have appeared under the titles Tender Tigers (2012), Rosalia’s Revolution in New York (2014) and Deathless Loves (2015).

The poem ‘Deathless Love’ starts with its title, breaking away from the life/death split and all the negativity of anti-vitalism, away from the clichéd association of Eros with Thanatos, to reach the Utopian that surpasses them. So love through sexual union is always an experience without death because it transcends it, infinitely prolonging life, as stated in the last line as its manifesto: ‘And life prolongs itself serenely, ever more’.

The micro-poems that make up the sequence ‘Minimum, maximum’ illustrate the explosion of harmony through the implosion produced by loving union, which dissolves binary contraries and integrates all differences: foreignness and belonging (‘Places’), sedentary and nomadic lifestyle (‘Nomads’), centre and periphery (‘Centres’), altitude and latitude(‘Mountains’), language and silence (‘Languages’), the present and transcendent (‘Passion’), departure and return (‘Return’), abstract and experienced time (‘Clock’) external and internal beauty (‘Museums’), concrete space and abstract utopia (‘Happiness’), ascension and immersion (‘Seagulls’)…In short, this is affirmative poetry in which amamus ergo sumus is an existing utopia, always understood as eutopos (good place) and not as outopos (no place). It comes to expression in the consolidation of bodies, in unity and multiplicity, as in the micropoem ‘Together’: ‘We live in a huge kiss / given permanently.’ 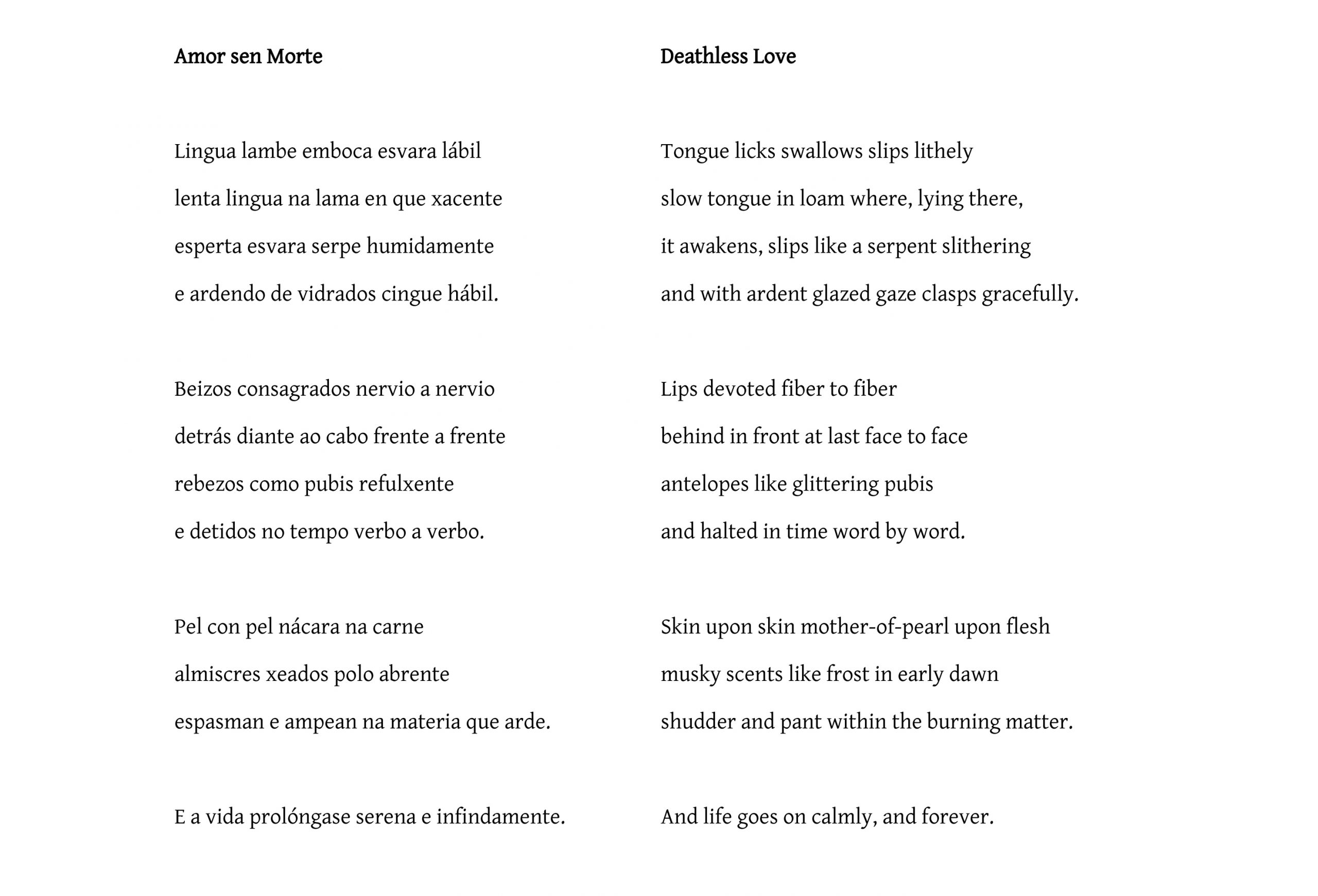