Born around 1480 either in or close to Baghdad, Fuzûlî was acknowledged as one of the most accomplished Ottoman poets in his lifetime, and still maintains that honour. Remarkably, he lived and flourished in Baghdad and not in the Istanbul court, and for this reason perhaps there is scant information about him. His date of birth is not known.  He grew up in the so-called ‘Arab ʽIraq’, which at the time was under the rule of the Akkoyunlu Turkmens, and Fuzûlî was clearly one of them. The son of a mufti, he had a well-rounded education in the ʽaklî and naklî sciences, as he himself indicates in the prefaces of both his Turkish and Persian divans (collections of poetry).  Famously, he composed poetry (and prose) in all the elsine-i selâse, the ‘three languages’ which the Ottomans held near and dear: Arabic, Persian and Turkish. Indeed, with forty-six kasides and four hundred gazels, his Persian dîvân is significantly larger than his Turkish one with twenty-seven kasides and three hundred gazels.

Fuzûlî was a young poet of considerable fame in Baghdad when the Safavid Shah Ismail gained control of the city in 1508, and he dedicated one of his first works to him. It is a Turkish mesnevi entitled Beng ü Bâde which describes a contest (munâzara) between Opium and Wine, a possible reference to Shah Ismail’s love of the latter and the Turkmen ruler’s addiction to the former.  He was still in Baghdad when it changed hands again in 1534 following the victorious campaign of Sülyeman the Magnificent.  Fuzûlî addressed five kasides to the Sultan himself and several others to leading members of the Ottoman army.  Already before leaving Baghdad, Süleyman promised him reward from a waqf.  However, this did not materialize in the expected way, and Fuzûlî subsequently had to send a quite famous letter of complaint (Şikâyetnâme) before he could be assured of a respectable steady income, always in Baghdad, where he died during a plague epidemic in 1556.

Amongst Fuzûlî’s Turkish works his rendition of the Leylâ and Mecnûn story is recognized as a towering achievement, while his kasides and gazels have been admired and praised throughout, albeit for slightly different reasons.  Fuzûlî’s kasides display remarkable sophistication and rhetorical refinement, while his gazels are written in a more direct style and are considered choice examples of ‘inimitable simplicity’ (sehl-i mümteniʽ).

A key characteristic of Ottoman poetry is that the Sufi or mystical dimension which was was characteristic only of some of Persian poetry becomes dominant and all-encompassing. At the same time, Ottoman poetry strives to maintain a balance (iꜤtidâl) between the things and activities of the physical, and only deceptively ‘real’, world and their corresponding metaphysical, and hence truly ‘real’, forms. This balance is subtly alluded to throughout by the poets’ words, but unveiled only to those able to perceive it with the ‘eyes of a pure and polished heart’.  In Ottoman poetry the mystical interpretation was ubiquitous, but the flavour of an actual party on a rose garden, an actual beloved, and an actual fragrant rose is that much more sharply heightened for it. The unseen thus enhances the seen, the truly real the deceptively real. And Fuzûlî is a prime practitioner of this.  In this regard, it is noteworthy that Fuzûlî composed a prose work of kalam in Arabic, entitled Maṭlaʽu’l- iʽtiḳād fī maʽrifati ’l-mabdaʼ wa-’l-maʽād, about quintessentially Neoplatonic topics such as the nature and ways of the acquisition of knowledge (maʽrîfa) and the origin and characteristics of the cosmos.

Fuzûlî was in Baghdad when it had the fortune of being conquered by Süleymân the Magnificent, and it was there that he composed his panegyric addressed to the victorious Sultan reproduced here. It came to be known as Rose qasida (Gül kasidesi) on account of its post-rhyme refrain which is the word gül (Persian gol), meaning ‘rose’. Every line of the poem thus ends on the word ‘rose’, which provides ample opportunity to assign the flower all manner of startling significations.

The analogical realm of Ottoman poetics has enabled Fuzûlî to explore this image in the grandest way possible. The rose has the power to dispel the rust from heart of the beholder and turn it into a polished mirror able to discern and reflect the manifestations of transcendent beauty hidden in the world of matter. The flowering of the rose in the poem becomes a metaphor for all the arts: calligraphy, poetry, music and even the culinary arts. Thus the rose ‘opens’ the pages of a manuscript (meçmûʿa,21), ‘memorizes’ lines of poetry (21),‘circulates’ a scroll (tûmâr, 50) in the rose garden, and even ‘draws’ on the legendary tablet (levh, 29), an image which conjures up the Qurʾānic ‘tablet of creation’ (lawḥ, 22:85) on which the destiny of the world is said to be inscribed.  It learns the art of music (fen-i edvâr, 47) and is itself the architect (miʿmâr, 52) of the rose-garden. The meaning and message to be made manifest in all these forms of expression is essentially one: love and praise for the Creator and His earthly stalwart, the Sultan. 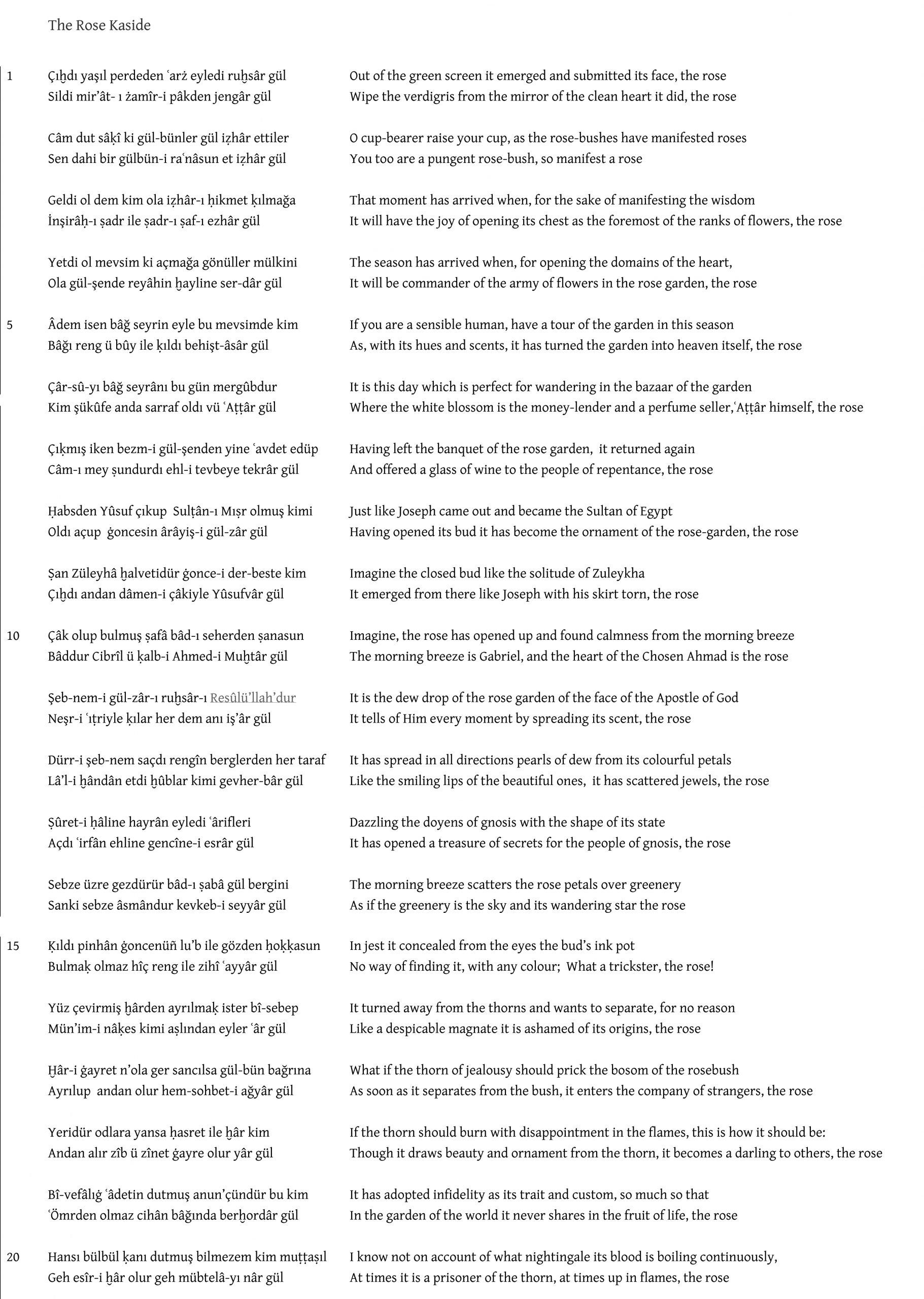 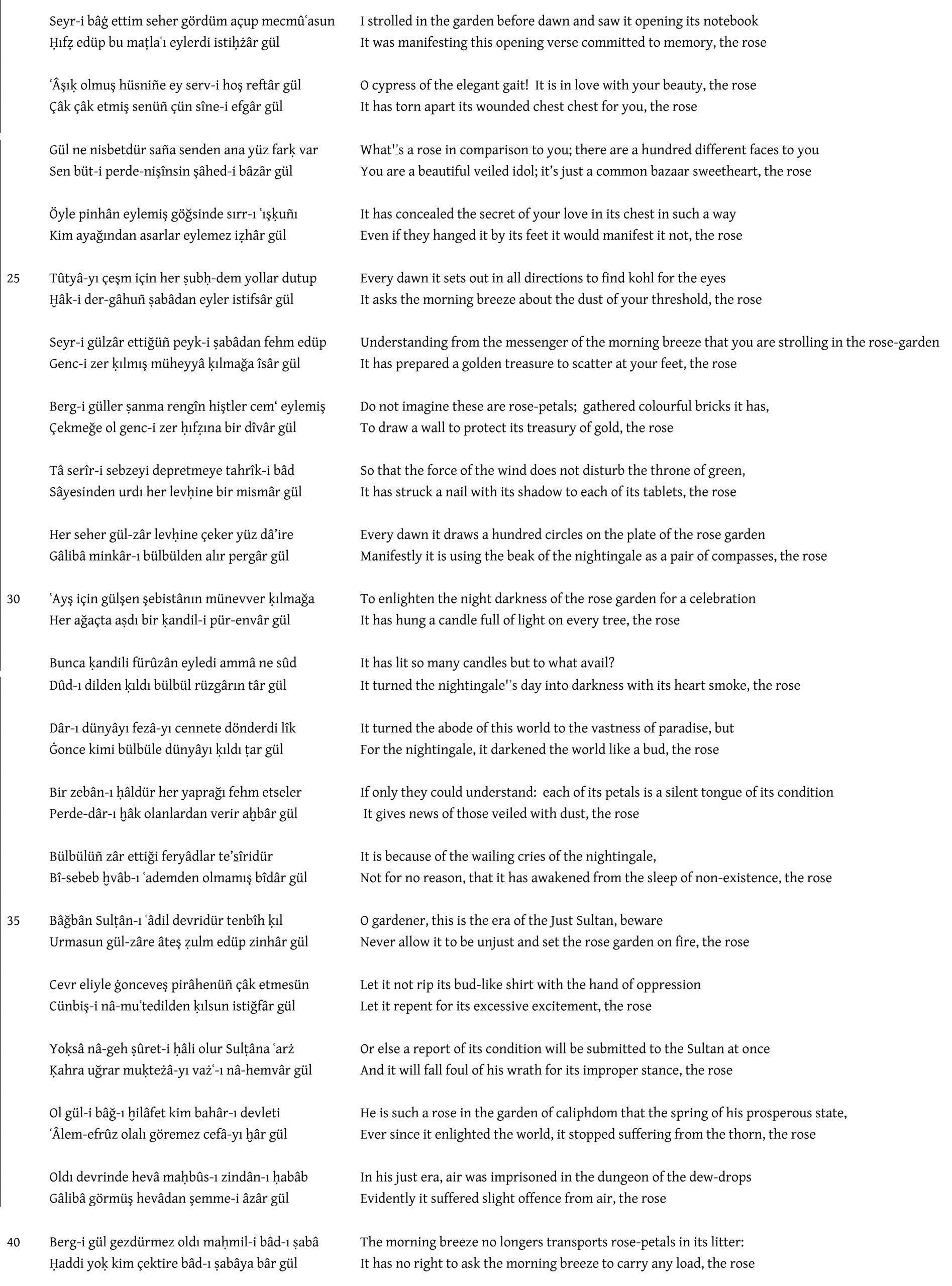 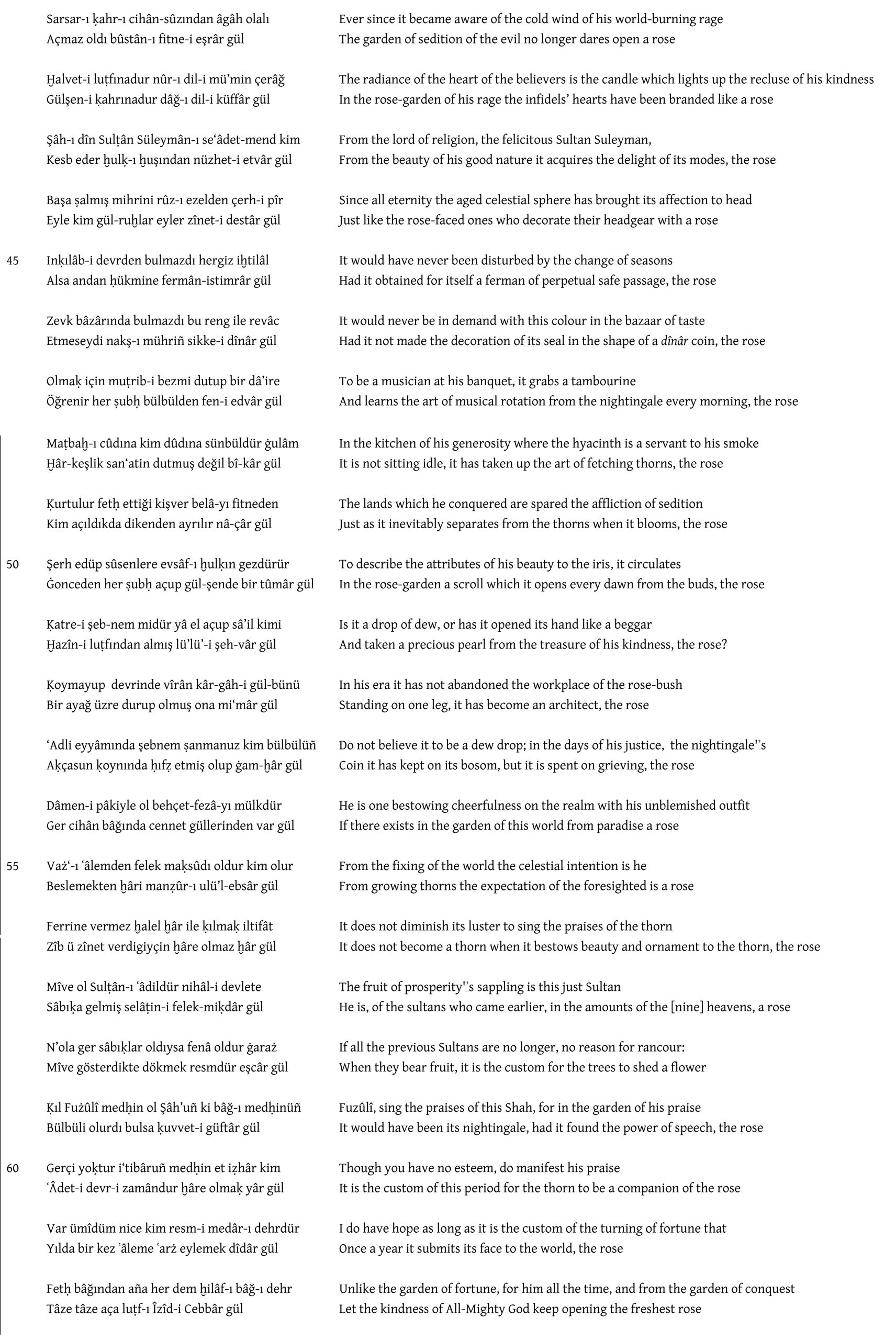