The Spanish poet and mystic St John of the Cross was born into a poor family in rural Castile, whose precarious existence worsened when his father died.  His widowed mother took her three young children, one of whom did not survive, to Medina del Campo in search of work and charity.  There the young John began his education, which continued with the Jesuits and then, as a Carmelite, at Salamanca University.  He did not complete his studies there; instead, inspired by a meeting with the future St Teresa of Ávila, he was persuaded to introduce among the male Carmelites the reform of the Order she had begun among the sisters.  The reform proved controversial and was strongly resisted by some.  While confessor to the nuns in Ávila John was arrested for disobedience by its opponents in December 1576 and taken to the conventual prison in Toledo.  There he was held in solitary confinement in a small, dark cell, until he escaped the following August.  Later testimonies indicate that he brought with him a number of poems which he had composed in prison.  He continued to work on these, as well as on a series of prose commentaries expounding three of them, including the ‘Noche oscura’ poem, from which comes his most famous expression, ‘the dark night of the soul’.  The reform continued and John occupied a number of important positions in it, before once again falling foul of the authorities and being banished to a remote monastery, where he died.

John’s poetry lay largely undiscovered and unknown until the early part of the twentieth century.  Its intense lyricism, its sensuality and its mystery appealed to those who were tired of the conventions of the past.  His language borrows as much if not more from oriental biblical traditions, and especially the Song of Solomon, as it does from western poetic traditions.  He was also influenced by the apophatic theology of the pseudo-Dionysius and the development of a more affective spirituality during the Middle Ages, with the result that the language of darkness and love predominates over the more Neoplatonic and Augustinian emphasis on light and knowledge.  In his major poems, the identity of the speakers and the times and places in which they enact their loving encounters is vague and shifting.

‘Once in the dark of night’

The ‘Noche oscura’ poem, written in lira form, imagines an escape from a house at dead of night and a journey through the darkness to union with an unnamed lover in an unnamed place.  The only light which shines is the light burning in the narrator’s heart.  In that sense it appears to represent a journey located within the self.  The imagery is governed by the nocturnal setting and the destination is the union of the protagonists in mutual love, though this takes place in the silence between the fourth and fifth stanzas.

In his translation, Colin Thompson has tried to maintain a broad equivalence with both line length and rhyme scheme of the original (7A, 11B, 7A, 7B, 11B).  The syntax of the penultimate stanza is ambiguous.  The natural reading, as here, is that the breeze is the subject which wounds the lover’s neck, but lines 3-5 have also been taken to form a new clause, detached from the first two lines, in which case it is the male lover who does the wounding.  An alternative translation, therefore, might be ‘he wounded my neck deep / with gentle hand and fair’. The poem features in Colin Thompson’s chapter ‘The Ascent of the Soul: Neoplatonic Themes in the Literature of Golden-Age Spain’ (see FoI, 318). 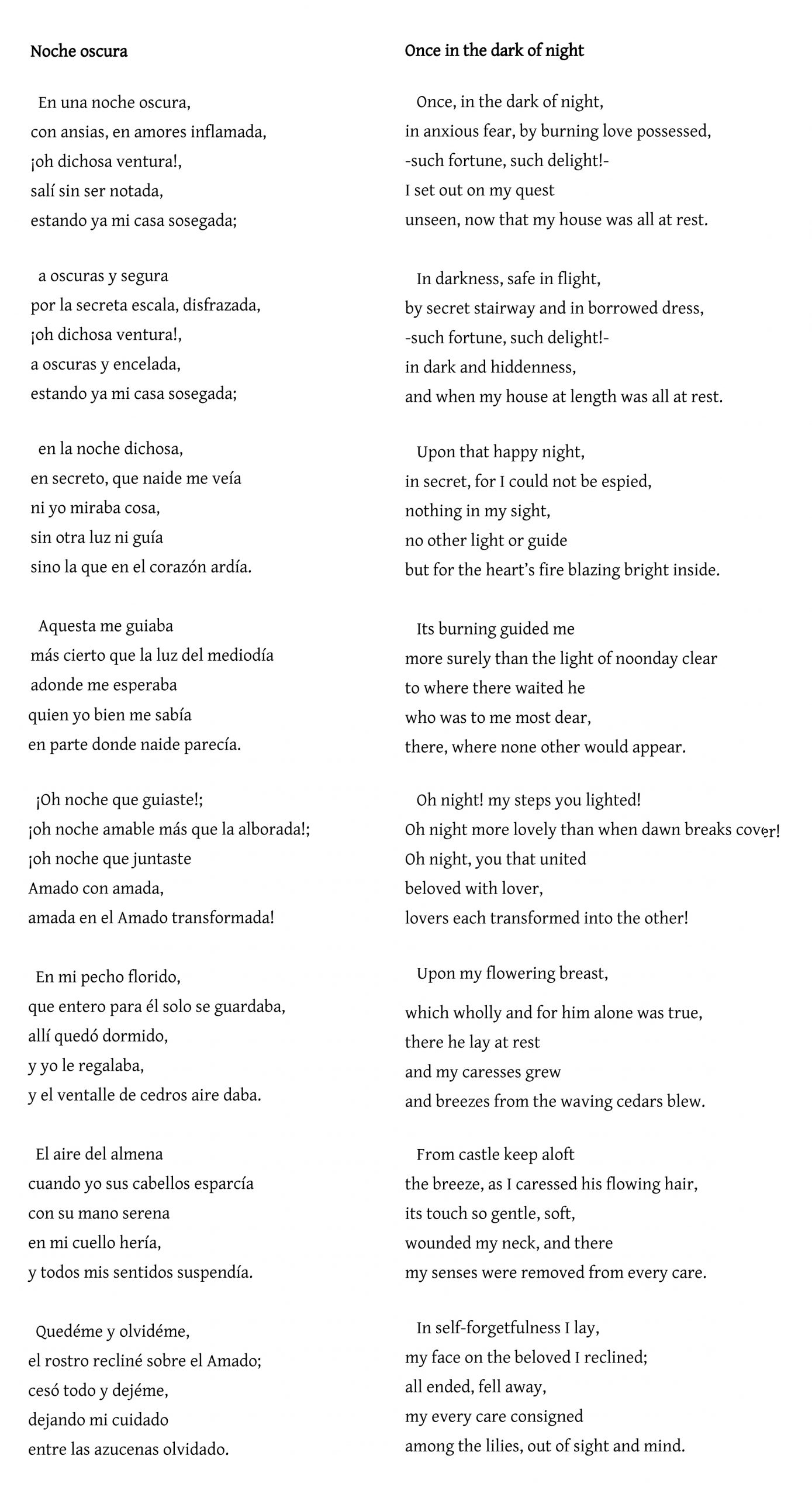