The most important writer of early modern colonial Mexico, Sor Juana was an intellectual prodigy celebrated throughout the Hispanic world as the ‘Tenth Muse’, the ‘Phoenix’ of Mexico. In childhood and early youth, she was writing verse in Latin and Nahuatl, and by seventeen the depth and breadth of her learning was astonishing the vice-regal court of Mexico City.  In 1669, she became a Hieronymite nun, motivated in large part by the freedom it allowed her to pursue her quest for knowledge. However, intellectual ambitions (both religious and secular) brought her into conflict with the Church hierarchy, most notably with the Bishop of Puebla, who, under the pseudonym Sor Filotea, censured her work and encouraged her, as a woman, to devote her energies to prayer.  Sor Juana’s riposte, the Respuesta a Sor Filotea (1691) is a profound, ironic and richly argued declaration of one woman’s right to literacy and female intellectual equality in general.  Even so, she was forced formally to abjure her secular interests and she sold her books (about 4,000 volumes) along with her collection of musical and scientific instruments. She died, aged 46, from the plague. Her varied and voluminous writings (secular lyric, philosophical and satiric verse, plays), continue to inspire. She has become a New World and feminist icon.

Many of the themes of Sor Juana’s feminism are on display in this sonnet. It exemplifies her interest in language as a material force. It is not a neutral mode of representation; like painting, verbal artistry colours the way we see the world and the way we live in it. Sor Juana exposes and casts aside the patriarchal deceptions that underwrite the inherited conventions of verbal and visual imagery. As she voids the ‘colourful deceits’ at work in the flattering portrait of her, she hints at a Neoplatonic transcendence of the distinctions and hierarchies that separate men and women. The sonnet is discussed in Julian Weiss’s chapter ‘A Poetics of Difference: Neoplatonism and the Discourse of Desire in the Early Modern Spanish Love Lyric’ (see FoI, 345-8). 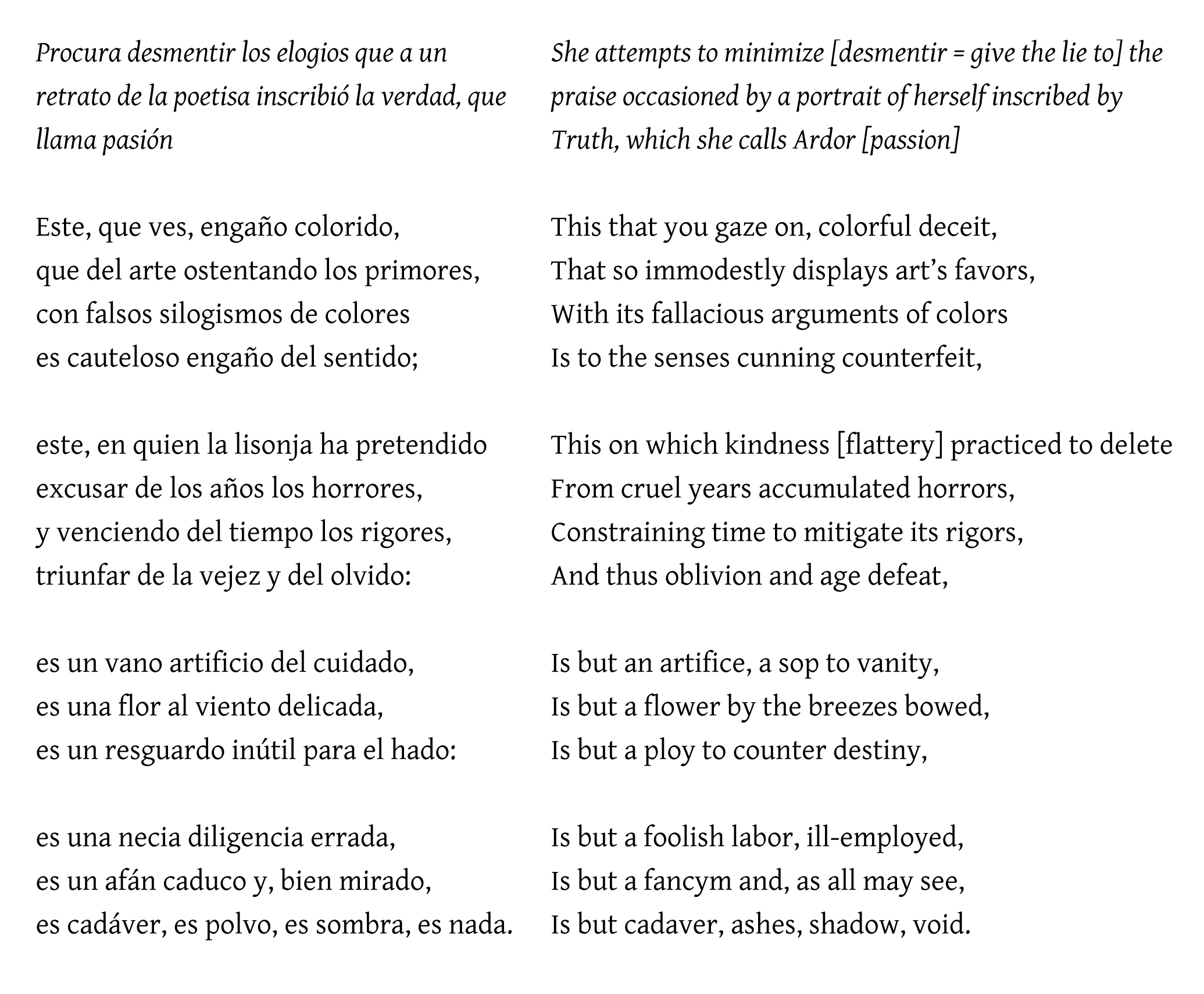