Quevedo was a Spanish nobleman whose literary output covers an extraordinary range.  He wrote a picaresque novel (El buscón), philosophical, moral and political treatises, works inspired by biblical books (notably Job), and satirical fiction, while his poetry ranges from some of the most scatological and misogynistic verse ever written to moral, philosophical and spiritual verse, and some of the finest love sonnets in the language.  His life was full of controversy, whether railing against the poetic trends of his day (especially the highly complex style adopted by his contemporary Luis de Góngora) or involvement in the politics of the court.  At first an admirer of the reforms introduced by Philip IV’s chief minister the Count-Duke of Olivares, he became a fierce opponent and was exiled from the court on several occasions.  While much of his satirical and burlesque poetry delights in verbal play and the use of contemporary slang, his serious verse has a clarity of diction and a refined allusiveness which privilege the exploration of content over verbal pyrotechnics.  In his more philosophical mode he was much influenced by Justus Lipsius and the revival of Neostoicism, but his love poetry adopts a more Neoplatonic tone.

Sonnet ‘The final shades may come’

This sonnet is perhaps the most famous of all his love poems.  It takes the form of an extended hyperbole in the first person of the idea that the lover will continue to love the object of his affections even beyond the grave.  Its artifice is evident from the very first word, which is a word of closure.  Death must come and my soul will leave the body, but the memory of my love will not be extinguished.  The seventh line, with its recreation of the Petrarchan paradox of the icy fire, as the lover’s passion, personified as a flame, crosses the chill river of death, is a fine example of the way in which Quevedo condenses a complex set of allusions into a line of elegant simplicity. Each line of the tercets corresponds to its counterpart: the soul will leave the body, but not cease loving; the veins which carried the fire of love will become ashes, but still have feeling; the marrow which burnt so ecstatically will turn to dust, but dust which is in love. The poem is discussed in Colin Thompson’s chapter ‘The Ascent of the Soul: Neoplatonic Themes in the Literature of Golden-Age Spain’ (see FoI, 308-10). 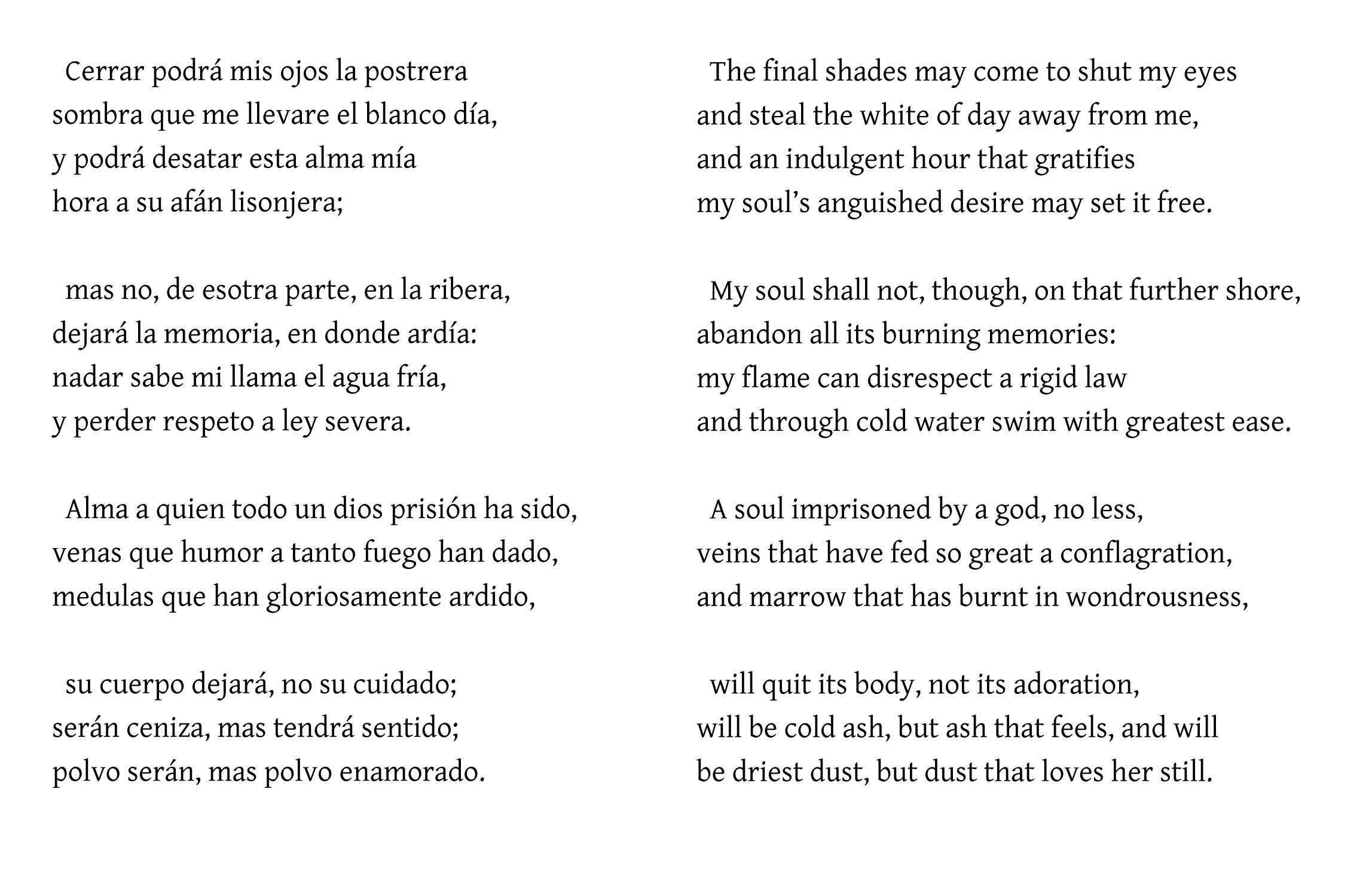