Like his colleague Mīkhāʾīl NuꜤayma, Nasīb ꜤArīḍa was a student at the Russian Teachers’ Institute in Nazareth. He migrated to New York in 2005 and was to become an active member of the Mahjar group of writers. He was instrumental in publishing their work in that he founded the Atlantic Press in 1912 which published the literary periodical al-Funūn/The Arts in which many of the poems, translations and articles of the group appeared. He was also responsible for collecting into book form the miscellaneous articles written by the leader of the group Jibrān Khalīl Jibrān (1883-1931) which was published in 1914 entitled DamꜤa wa Ibtisāma/A Tear and a Smile.  For much of his life ꜤArīḍa struggled with financial hardship, and most of his poetry is full of gloom and disillusionment. He gives the strong impression of never having been reconciled to his life as an exile, marked as it was by loneliness and a constant sense of nostalgia for his birthplace in Lebanon. He also records a strong sense of the hardships and humiliations suffered by Syria and Lebanon during World War I. ꜤArīḍa’s single volume of verse al-Arwāḥ al-Hāʾira/Perplexed Spirits was published in New York in 1946, the year of his death, but most of the poems were written between 1912 and 1930.

Being much influenced by Jibrān, the dichotomy of body and soul appears frequently in ꜤArīḍa‘s poetry. As illustrated in the example cited below, the theme alternates between a rare source of solace from the hardships of earthly life, and bitter complaints against the discontent voiced by the soul because of the fact that it is forced to live in an impure and contaminated earthly body. For a discussion of the poem see Robin Ostle’s chapter ‘Body and Soul in the Arabic Literature of the Americas’ in FoI, 399-400. 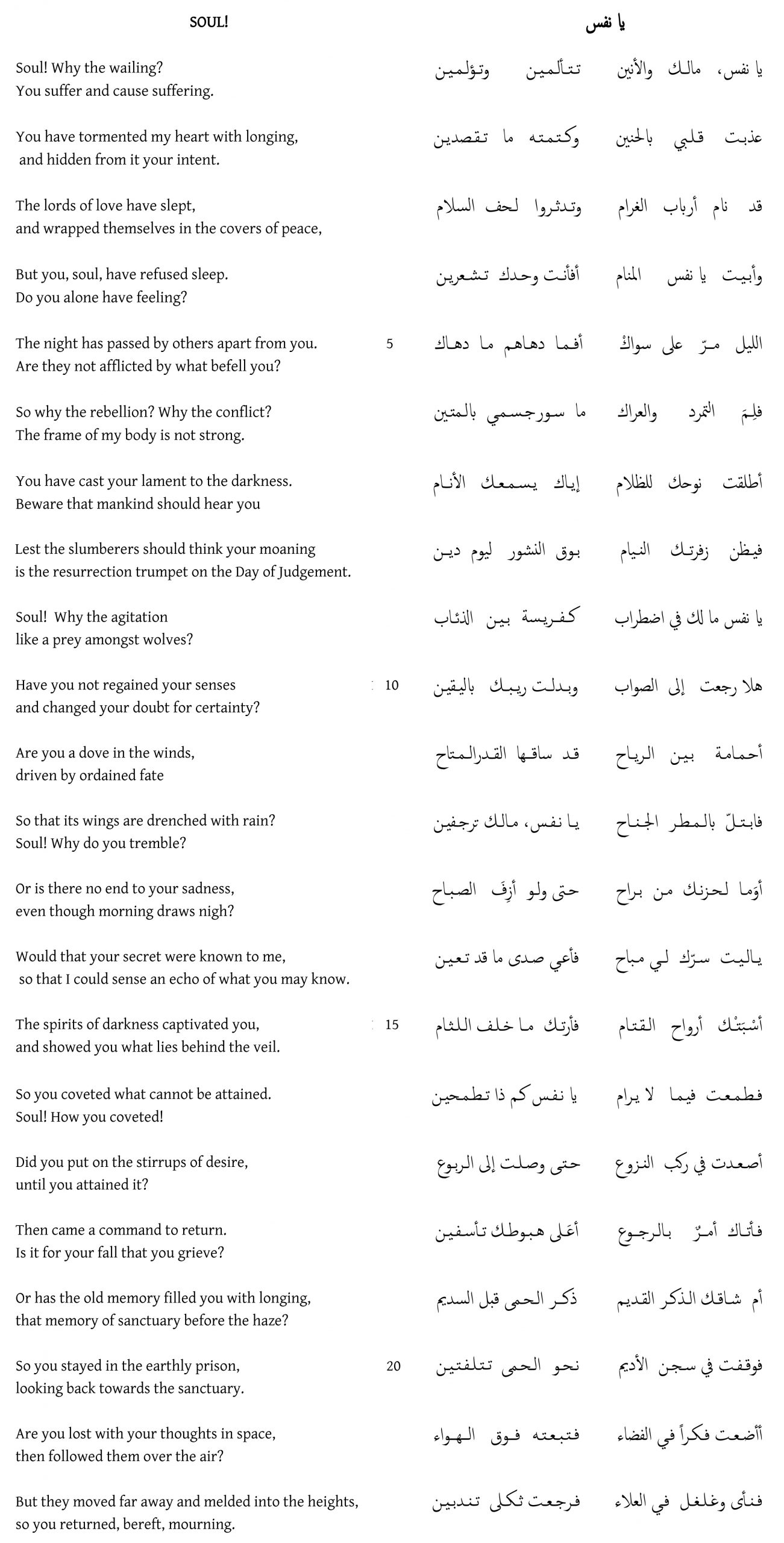 Nasīb ꜤArīḍa (1946), al-Arwāḥ al-Hāʾira (New York), 87-90. Translation by © Robin Ostle.
(I am grateful to my colleague Geert Jan van Gelder for a number of corrections and suggestions which have improved these translations. —R.O.)