Muhammad Afifi Matar was born in a village, Ramlat al-Anjab, in the Egyptian Delta in the governorate of Menoufia, and grew up in a modest family engaged in peasant farming. Matar himself practised tilling, planting, and harvesting even into his middle age. He referred to himself as a fellah (peasant). His poems abound with flora of his region and his metaphors are drawn from agricultural cultivation. Often known as the Eloquent Peasant given his mastery of poetry and poetics, he might also be referred to as the Cerebral Peasant given his passion for Philosophy. Matar was a typical child of provincial upbringing. His mother gave birth to him when working in the fields; he lost many of his siblings; and his education consisted of attending the Kuttab (Qur’anic informal school for kids) followed by institutional elementary and secondary schools. He had a passion for poetry from his childhood and was fascinated by the local folk poets. Reading Nietzsche at the age of seventeen made him opt for majoring in philosophy at Ain Shams University in Cairo. He taught Philosophy in secondary schools in Kafr al-Shaykh in the Nile Delta for several years where he edited the innovative monthly, Sanabil, publishing creative writing and literary criticism by emerging authors from different parts of Egypt.

He moved to Baghdad (1977-1983) where he practiced literary journalism and contributed to the monthly literary periodical, Al-Aqlam. After returning to Egypt, he lived in his village, engaged in peasant farming and visiting Cairo from time to time to attend cultural events. Known as a poet of poets, a poet with mastery of poetic language and profound attachment to philosophy, he wrote several collections that have been published and reprinted. Despite his reputation as a difficult and ambiguous poet, he has been translated to several languages. He received many honors including the prestigious Soltan Owais Prize for poetry granted by a private foundation in the United Arab Republic and the Prize of Merit for Literature by the Egyptian State. Besides, poetry and criticism, Matar has translated poetry and has written short stories to children.

The poem situates the Neoplatonic topos of the ascent of the soul in rural Egypt and conveys it in images that evoke parallels with the night journey and ascent of the Prophet Muhammad. The varying line spacing of the Arabic text, reproduced to some extent in the English translation, appears as though designed to contrast with the regular binary alignment of verses in the traditional Arabic poetic form. The text is discussed in F. Ghazoul, ‘Neoplatonist Echoes in Modern Arabic Poetry: The Case of Muḥammad ʿAfīfī Maṭar’ (see FoI, 413-6). 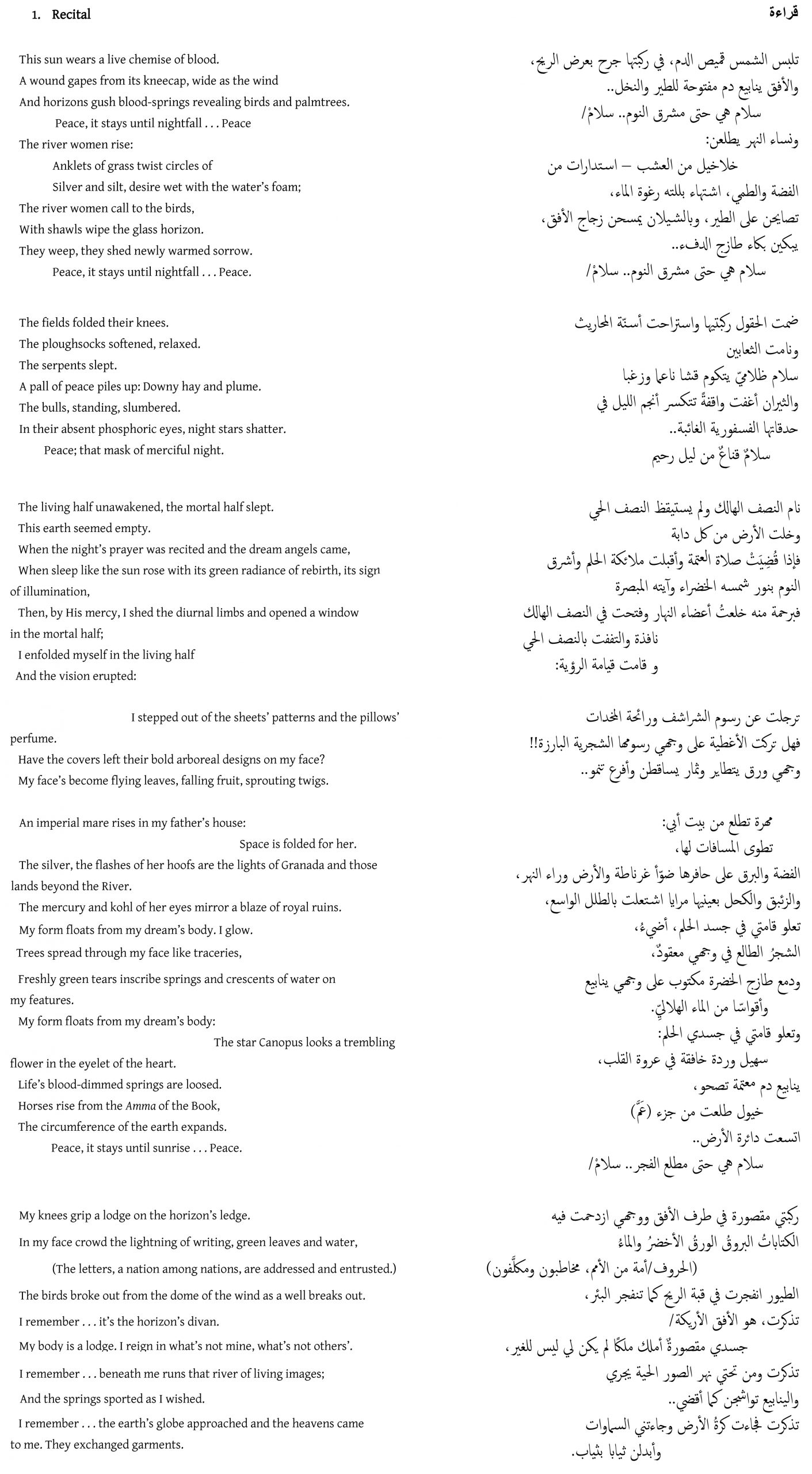 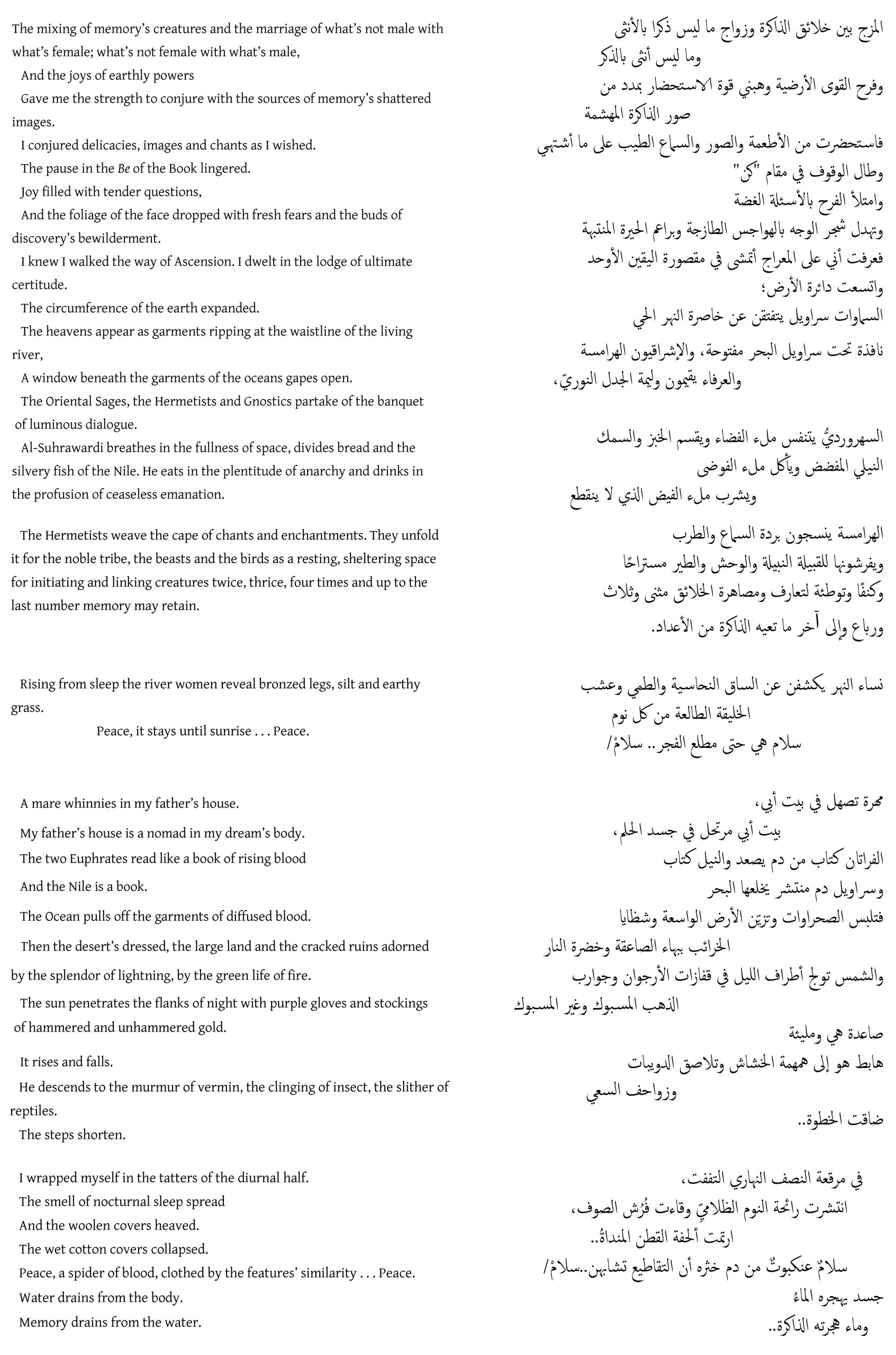 The Quartet of Joy is a substantial poetic meditation on the symbolic power of the four elements earth, fire, water and air. The first extract here reproduced combines associations to Greek philosophy and Islamic mysticism. The second depicts the union of lovers in death as a return to the earth. Both are discussed in F. Ghazoul, ‘Neoplatonist Echoes in Modern Arabic Poetry: The Case of Muḥammad ʿAfīfī Maṭar’ (see FoI, 410-13).