Rūzbihān Baqlī was a major Sufi master active in twelfth-century Shiraz in southwest Persia, famous for his love of beauty, which he expressed in prose and verse in Arabic and Persian. Among the many Sufis who have spoken on beauty, Rūzbihān stands out for the sheer amount and sophistication of his discussion on beauty. Most of his works remain untranslated, including key texts for understanding his view on beauty such as Mashrab al-Arwāḥ (‘The Drinking Place of Spirits’), also known as ‘A Thousand and One Stations’, outlining the journey of spirits from God and back to God, and ʿAbhar al-ʿĀshiqīn (‘The Jasmine of Passionate Lovers’), a Persian masterpiece in defence of practicing passionate love (ʿishq) for God, which established Rūzbihān’s standing as a major theoretician of love in Islam.

Rūzbihān is often regarded as a representative of love mysticism prevalent in Shiraz and its surrounding regions, linking such Sufis as Ḥallāj (d. 920), Ibn Khafīf (d. 982), and Abū al-Ḥasan al-Daylamī (fl. c. 1000), the compiler of the earliest known Arabic compendium on sayings on love, with which Rūzbihān had thorough familiarity, while he held Ḥallāj and Ibn Khafīf in high regard. A century after Rūzbihān’s passing, the great Persian poet, Ḥāfiẓ (1315-1390) is born in Shiraz. Scholars have pointed out a possible link between Rūzbihān and this great Persian poet of love, which calls for further scholarly investigation.

The recognizers in the house of the seven climes

The following Persian poem is found in Rūzbihān’s hagiography written by one of his great-grandsons, ʿAbd al-Laṭīf Shams b. Ṣadr al-Dīn Abī Muḥammad Rūzbihān Thānī (d. 705/1305). The first part of the poem highlights the unknowability of God’s essence. This unknowable aspect of God is posited as the Severity or Majesty of God, while the knowable aspect of God is presented as the Beauty of God. Rūzbihān points out how it is the unveiling of the divine Beauty that causes love in human beings, turning them into lovers of God. The unknowable God makes Himself knowable through His attributes and creation, all of which are His signs given to human beings. In the last few lines, Rūzbihān indicates that even this knowable aspect of God, i.e., Beauty, is too intense for human beings to behold or comprehend. This leads the lovers of God to bewilderment, love-madness, and eventually to self-annihilation into the oneness of God, just like a moth that flies into fire. The poem is discussed in Kazuyo Murata’s chapter ‘Beauty Stings: Plotinus and Rūzbihān Baqlī on Beauty’ (see FoI, 150-4). 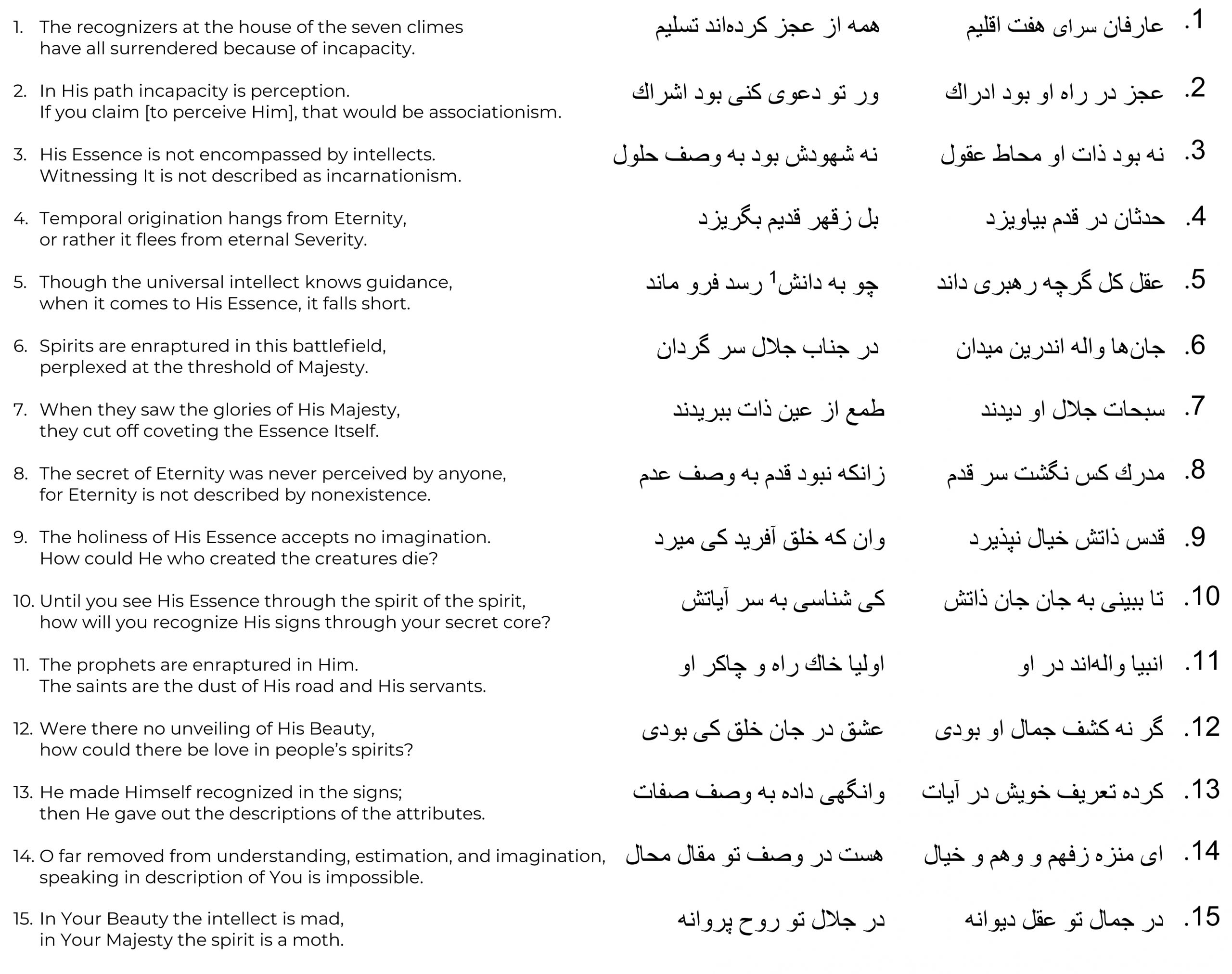