Paul the Silentiary, well known as an epigrammatic poet, also wrote two important poetic descriptions, one of the Hagia Sophia in Constantinople (1029 verses, most of them hexameters, after the first 134 iambic verses), the other of its altar (304 verses, of which 29 are hexameters). Of particular note are the analogies the poet makes between the circular space of the church, the movements of the celestial vault and the movements of the soul. They recall the prominent function of circularity in the cosmology of Neoplatonism. Thus, Plotinus saw circularity as a form of continuity between the sensible and the intelligible worlds, while for Porphyry, circularity features in the allegorical description of divine beings who belong to eternity. In a similar vein, John of Gaza’s description of the architecture of Hagia Sophia overflows with a rich vocabulary that references spheres and circles. He thereby includes also the truly choreographic ceremonial of the Byzantine liturgy in order to fashion a kind of poetic journey which leads the reader/visitor through diverse sacred thresholds towards inner illumination when visualising the description of this magnificent Church (Van Opstall, 2018).

As Nicoletta Isar (2006), who studies sacred space in Byzantium, has pointed out, Paul’s vision, with its concentric circles bathed in light, reflects Plotinus’ view of the world emanating from ontologically superior light, and recalls Proclus’ ideas of astral movement as a perfect circular dance. When the illumination of the church is described with numerous symbolic allusions (e.g. vv. 810-920),  the viewer is led to the paradoxical vision of a ‘sun rising in the night’. Beneath it, under concentric circles of light, lies the ambo of the church, located in the axis of the very center of its cosmological circularity. The contemplation of such beauty is intended to lead the mortal soul, as in Neoplatonic aesthetics, to a superior understanding of metaphysical truths. John’s wondrous vision of the church is discussed in David Hernández de la Fuente’s chapter ‘Neoplatonism and Poetics in Ancient Greek and Byzantine Literature’ (FoI, 77-8). 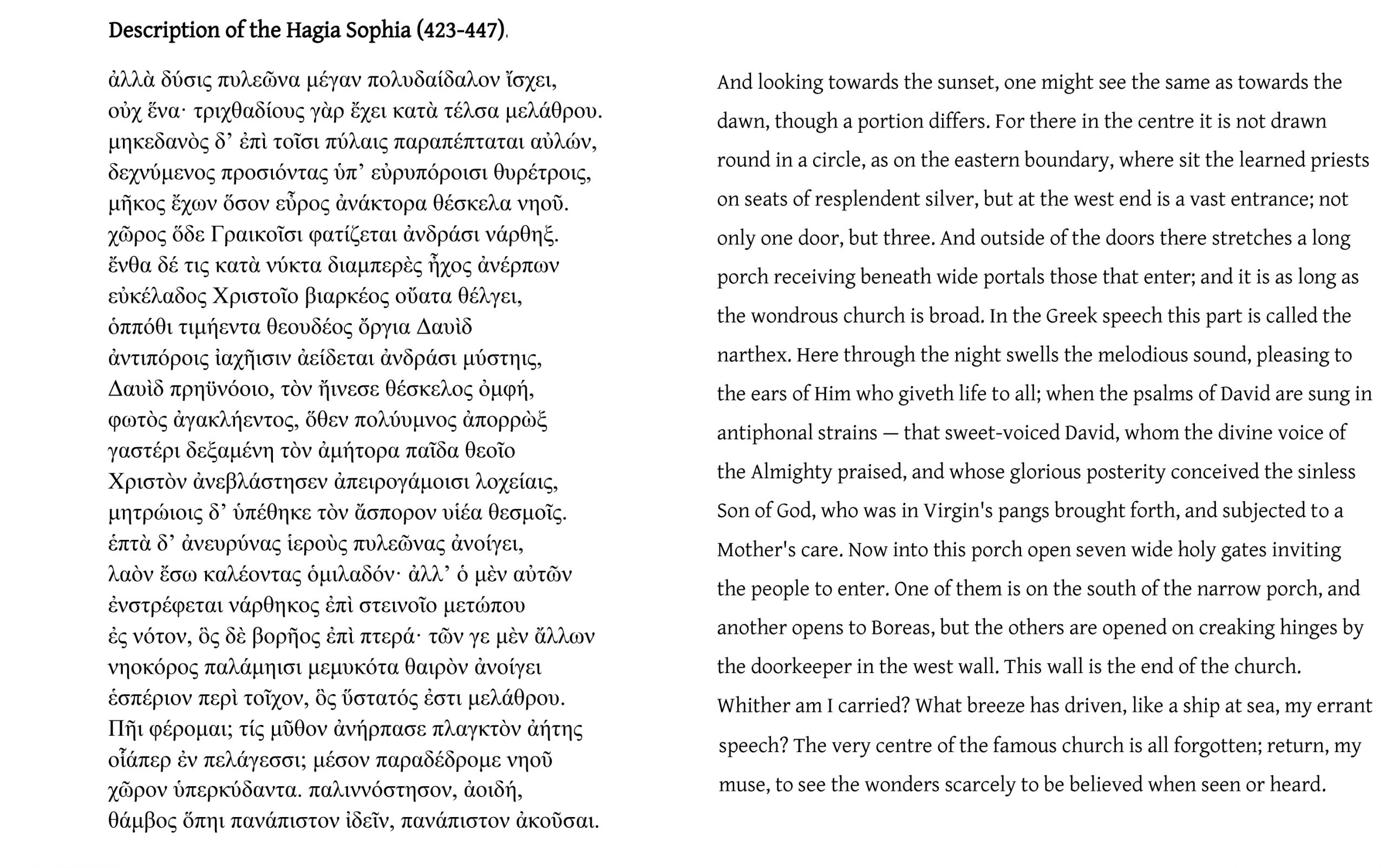 Translation adapted from C. A. Mango (1986), The Art of the Byzantine Empire 312–1453: Sources and Documents (Toronto, University of Toronto Press).

Isar, N. (2006), “Chorography (Chôra, Chôros, Chôrós) – A performative paradigm of creation of sacred space in Byzantium”, in A. Ridov (ed.), Hierotopy: The Creation of Sacred Spaces in Byzantium and Medieval Russia (Moscow, Indrik), 59-90.
Van Opstall, E.M. (2018), “On the Threshold: Paul the Silentiary’s Ekphrasis of Hagia Sophia”, in E.M. van Opstall (ed.), Sacred Thresholds: The Door to the Sanctuary in Late Antiquity (Leiden/Boston, Brill), 31-65.