The most emblematic Greek poet of late antiquity is perhaps also the maître de poésie of a possible school of Neoplatonic poets. Creator of a new symbolic and allegorical epic about divinity, both pagan and Christian, with profound theological and philosophical implications, nothing is known about the life of the Egyptian Nonnus. Nevertheless, the influence left by his two known works, the Dionysiaca and the Paraphrase of the Gospel of Saint John (the latter perhaps a global hymn to the late-antique redeeming divinity) is of enormous interest. Unfortunately, the philosophical context of his two works, which are marked by the use of Neoplatonic leitmotifs, such as the passage from the one to the many (and vice versa) or the idea of participation, and, in the Dionysiaca, by numerous allusions to oracles (Ruíz Pérez 2002 and Lightfoot 2014), has traditionally been neglected.

Critics have preferred to see in Nonnus the influence of astrology (Stegemann 1930), Alexandrian poetics (D’Ippolito 1960), or rhetoric (Miguélez 2008), among other themes. But the Dionysiaca contain allusions to late paganism, theurgy, and Neoplatonism, while the Paraphrase contains Neoplatonic metaphors and epic-Dionysian references that allude to Christ, the Apostles or the Virgin Mary. In the first place, these were perhaps intended to ennoble the theoretically ‘simple’ language of the Gospel, but a closer analysis of the context (Livrea 1989, Greco 2004) can give rise to clarifications about the philosophical influences on the work, which was also marked by the Christological debates of the era as well as by the commentary on Saint John of Cyril of Alexandria.

If the structure of both works is closely studied, it is possible to detect philosophical intimations at various levels of allusion. For example, they can be seen in the prophetic references, as in Zagreus’ mirror in the Dionysiaca where we find a clear application of Neoplatonic aesthetics as a category of analysis (the mirror being a favorite theme of Neoplatonism). They can also be seen already at the beginning of the Paraphrase in the Neoplatonic hymn to the Logos, which makes it clear that we are not dealing with a mere poetic version of the Gospel, but rather with a philosophical reading centered on the ‘intelligible light’ (νοερὸν φάος) and other philosophical-noetic adjectives.

The lexicon by Peek (1968–1975) and the study of Nonnian adjectivisation by Espinar (2003) bear witness to the richness of the language used by Nonnus to express Neoplatonic notions such as that of the roundedness of the cosmos (Hernández de la Fuente 2011) in the journey of Phaeton through the houses of the Zodiac, or in the washing of the feet of the Twelve Apostles. At least at the level of literary expression, we can find traces of Neoplatonic philosophy. Although the allegorical intention is not always clear, the vocabulary from Neoplatonism appears at key moments in Nonnus’ work in a manner which undoubtedly paved the way for the adoption of these models in later poetry.

As discussed by Hernández de la Fuente in his chapter ‘Neoplatonism and Poetics in Ancient Greek and Byzantine Literature’ (FoI, 53-92), Nonnus’ allegorical and revolutionary style would, in the following two hundred years, be imitated by other epic poets belonging to so-called ‘School of Nonnus’. This name attests to the broad social, cultural, and literary panorama of the late-antique East in which these poets were educated. Even though Nonnus’ poetic work ‘did not arise in a vacuum’ (Miguélez 2008, 22) and the solid cultural context of the Thebaid and the exhaustive rhetorical education so typical of late antiquity have been demonstrated, the insistence of traditional classical philology on the importance of rhetoric for the late-antique style does not seem sufficient to explain the peculiarity and strangeness of some passages of cosmological description or Dionysian revelation in Nonnus. We cannot minimize the importance of the literary model as well as the aesthetic and poetic revolution that Nonnus created. It is also not possible to ignore that the Neoplatonic foundation of his work inspired poets who were clearly indebted to him and imitated him closely, as Daria Gigli (2008, 83) points out: ‘un gruppo di poeti che si richiamano in mode più or less evident ai dettami stilistici e mettrici dell’autore’. The variegated complexity (poikilia) of Nonnus’ poetry, both in its allegorical treatment and in its philosophical amplification of classical myths and the Gospel, was destined to have a profound influence, especially on the subgenre of ekphrasis, but also on later epics, epigrams and hymns. 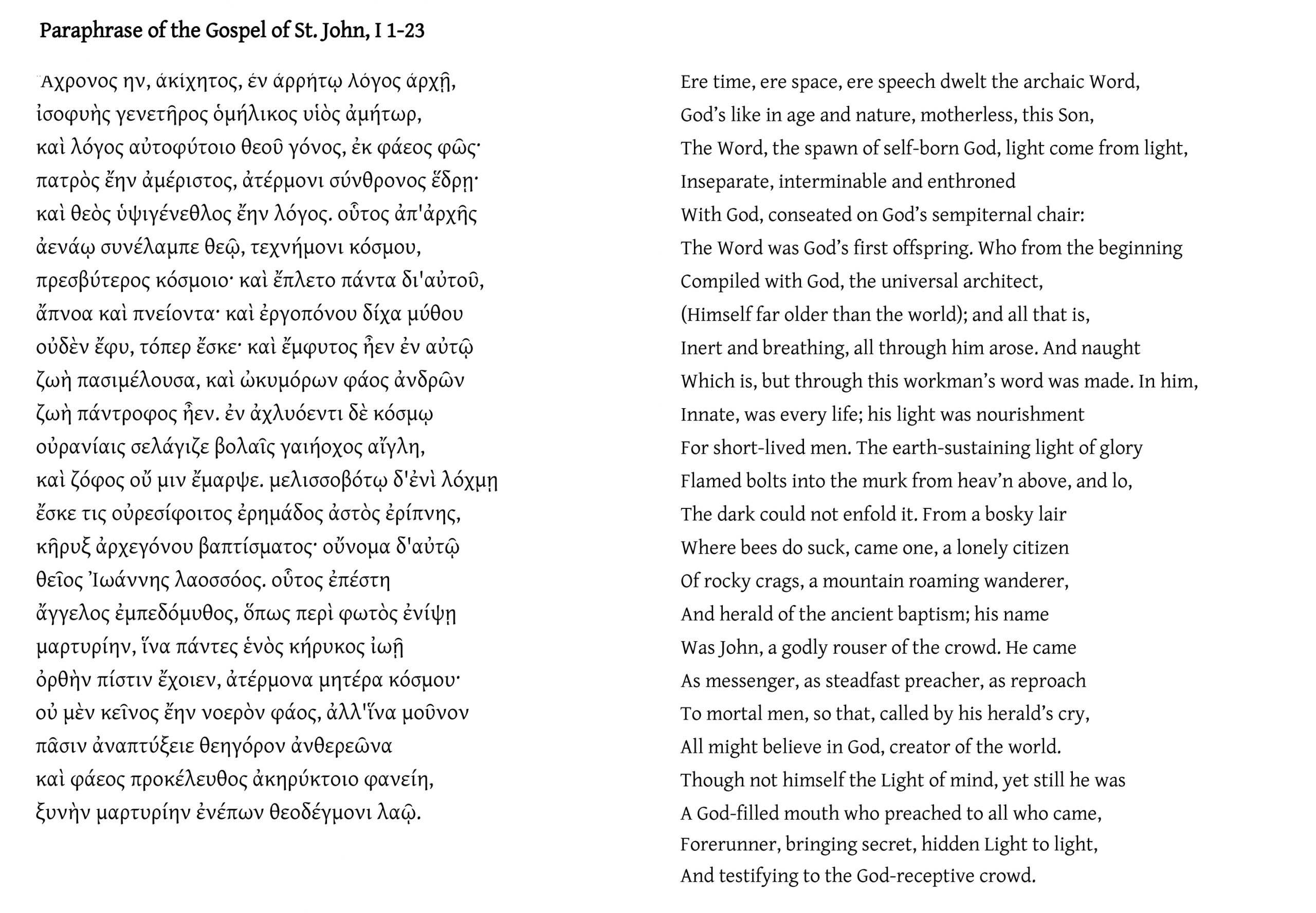 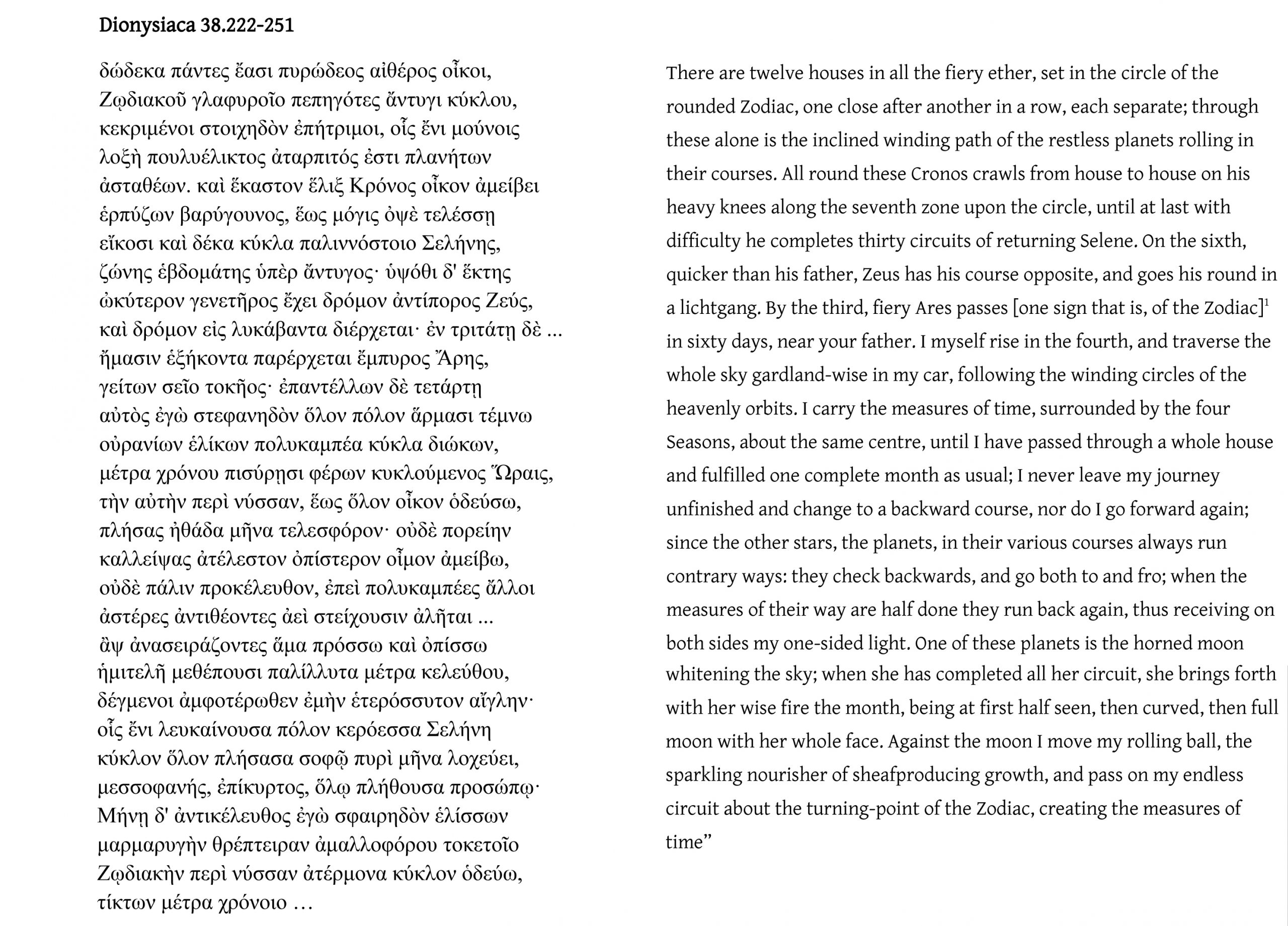 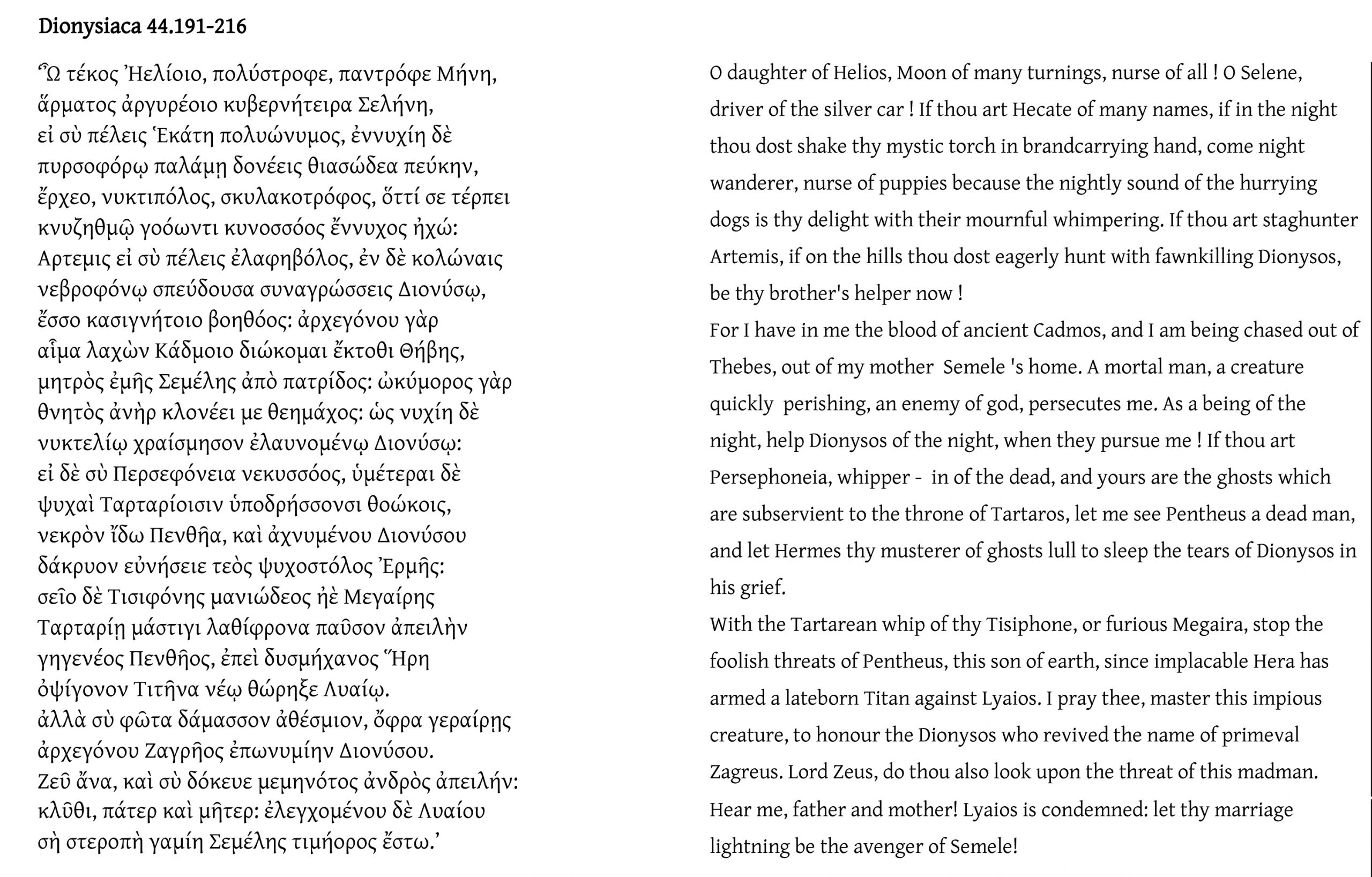 Lightfoot, J. (2014), “Oracles in the Dionysiaca”, in K. Spanoudakis (ed.), Nonnus of Panopolis in Context: Poetry and Cultural Milieu in Late Antiquity with a Section on Nonnus and the Modern World. (Berlin/New York, De Gruyter), 39-54.