The posthumous publication in 1543 of the collected poems of Juan Boscán and Garcilaso de la Vega marked a definitive turning-point in the history of Spanish poetry through their adoption of Italian poetic genres and metres and the language and imagery of Petrarch.  Boscán’s much larger opus was quickly eclipsed by that of his close friend Garcilaso, whose thirty-eight sonnets, though not the first examples of the form in Spanish, quickly acquired canonical status, as did his ‘canciones’ (canzone), elegies and eclogues, the latter inspired by Virgilian models.  His status was enhanced by his life as a man of action and a man of letters, a soldier-poet who embodied many of the virtues of the Renaissance courtier, as set out in Castiglione’s celebrated work.  He spent his adult years in the service of the Spanish Crown, some of them in Italy, where he cultivated a wide circle of Italian humanist writers and thinkers.  He fought in a number of military actions and met his death on active service during the Spanish invasion of southern France.

Sonnet 8, ‘Out from those eyes’

His eighth sonnet begins with the Neoplatonic commonplace of the eyes as the organ of communication from one soul to another.  But rather than exalting an essentially spiritual bond of love, the ‘vapours’ or ‘spirits’ which proceed from the lady create only confusion and frustration in their recipient.  The language is paradoxical and the argument dense: her gaze touches the sickness he suffers from (his unrequited love) and creates a kind of madness in him.  Though she is absent, he can imagine her, but this only increases his torment, because when he does, the ‘spirits’ which proceed from his returning gaze find that they are blocked from reaching her by her absence or indifference.  The carefully ordered structure of the sonnet, rhyming ABBA ABBA CDE CDE, stands in stark contrast to the conflicting emotions it articulates and the fiery imagery the coldness of the lady provokes.  The sonnet plays with different kinds of presence and absence and movement and paralysis as it reveals the imbalance of a one-sided relationship: though apparently about her, it is, in fact, all about him.  A characteristically strong final line sums up his predicament, unable to find a way out.   Earlier critics tried to identify the lady in question, but it is more likely that, as with so many other sonnets in the Petrarchan tradition, she is generic rather than particular. The poem features in Colin Thompsons’s chapter ‘The Ascent of the Soul: Neoplatonic Themes in the Literature of Golden-Age Spain’ (see FoI, 307). 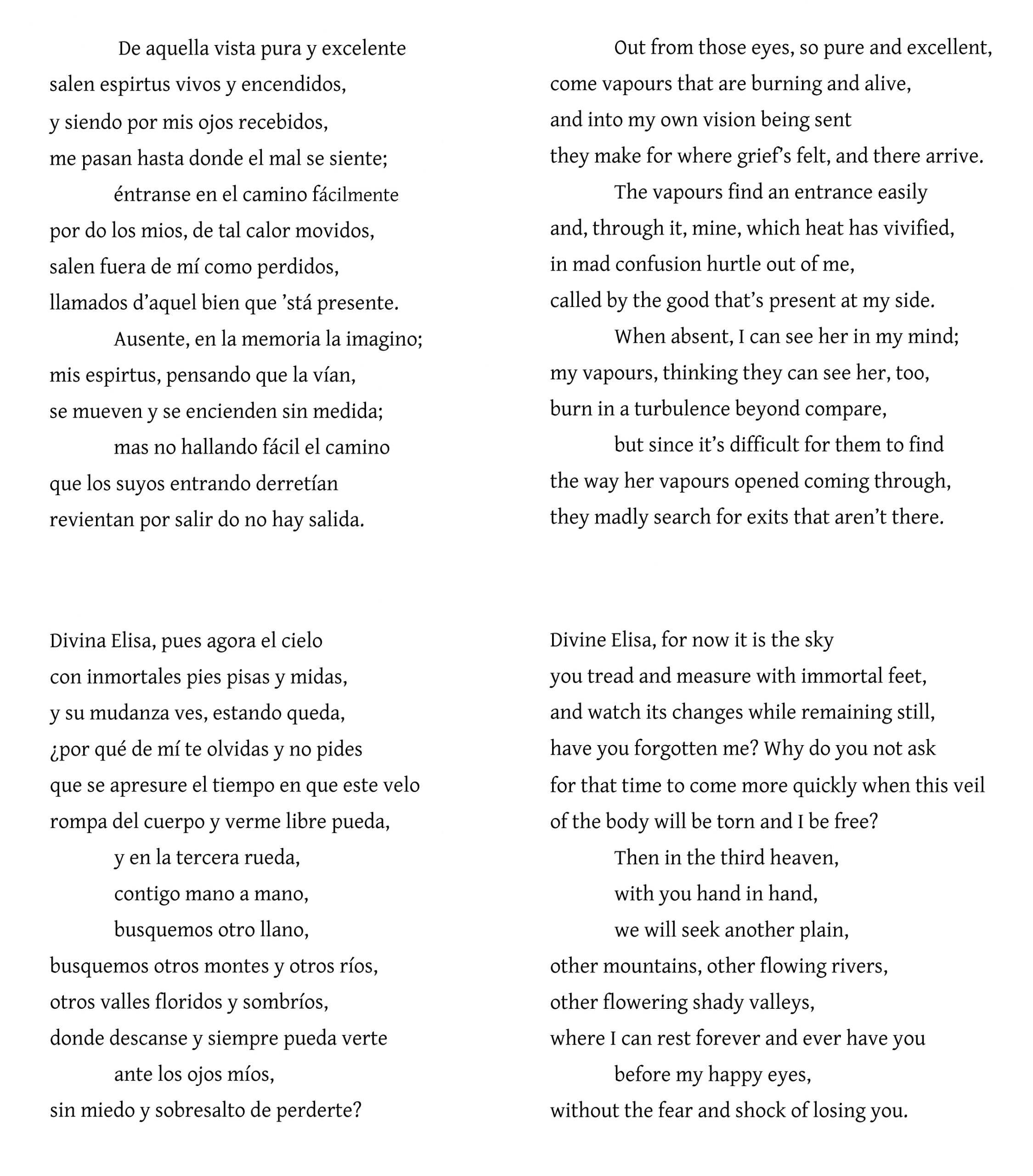