Born in Paphlagonia in 949, Symeon received a thorough education in Constantinople to prepare him for a career at court. However, he left this path to retire to the monastery of Studion where he established a new and controversial monastic discipline and dedicated himself to the writing of theological and poetic works, such as catechumenal discourses, hymns of divine love, and theological discourses. His innovative theology made him fall out of favor with the ecclesiastical hierarchy and he was confined to the monastery of Saint Macrina. He died in 1022. Later he was sanctified by the Orthodox Church and became the last to receive the title of ‘theologian’ in the Eastern tradition, after Saint John the Apostle and the Gregory of Nazianzus (Alfeyev 2000). His poetry, his theology, and his idea of the experience of God were profoundly influential and left a lasting mark on orthodox monasticism and the later Hesychastic controversy.

The poetic work he left behind is revolutionary in terms of its adaptation of Neoplatonic models to create a of distinct form of Byzantine mysticism. It has often been argued, erroneously in the present writer’s view, that Symeon had no training in philosophy. His poetry contains a range of undeniably Platonic and Neoplatonic motifs, such as the metaphor of the charioteer for the soul and the notion of the soul’s ascent to the Good, which point to his familiarity with the philosophical tradition. He did, however, present himself as a layman who acquired his erudition through enlightenment rather than bookish wisdom. In this he is reminiscent of St. John of the Cross who also viewed poetic experience as the source of true philosophy (‘Este saber no sabiendo / es de tan alto poder / que los sabios arguyendo / jamás le pueden vencer’; ‘This knowledge without knowing / is of such high power / that the wise men arguing / can never overcome it’).

Symeon’s 58 Hymns of Divine Love, comprising some 11,000 verses, relate his mystical visions and his ascents to contemplation, while trying to give voice to the ineffable mysteries of the Holy Trinity, God the Father, and the Nature of Christ (McGuckin 2005). As noted by David Hernández de la Fuente in his chapter ‘Neoplatonism and Poetics in Ancient Greek and Byzantine Literature’ (FoI, 80-81), Symeon’s hymns use vocabulary typical of the Greek mysteries and are replete with Neoplatonic mystical features, such as the notion of the ascension to Him ‘who is above all praise … and who transcends all words’ (ὑπέρ ἔπαινον … ὑπέρ λόγον) which appears in the example cited below. 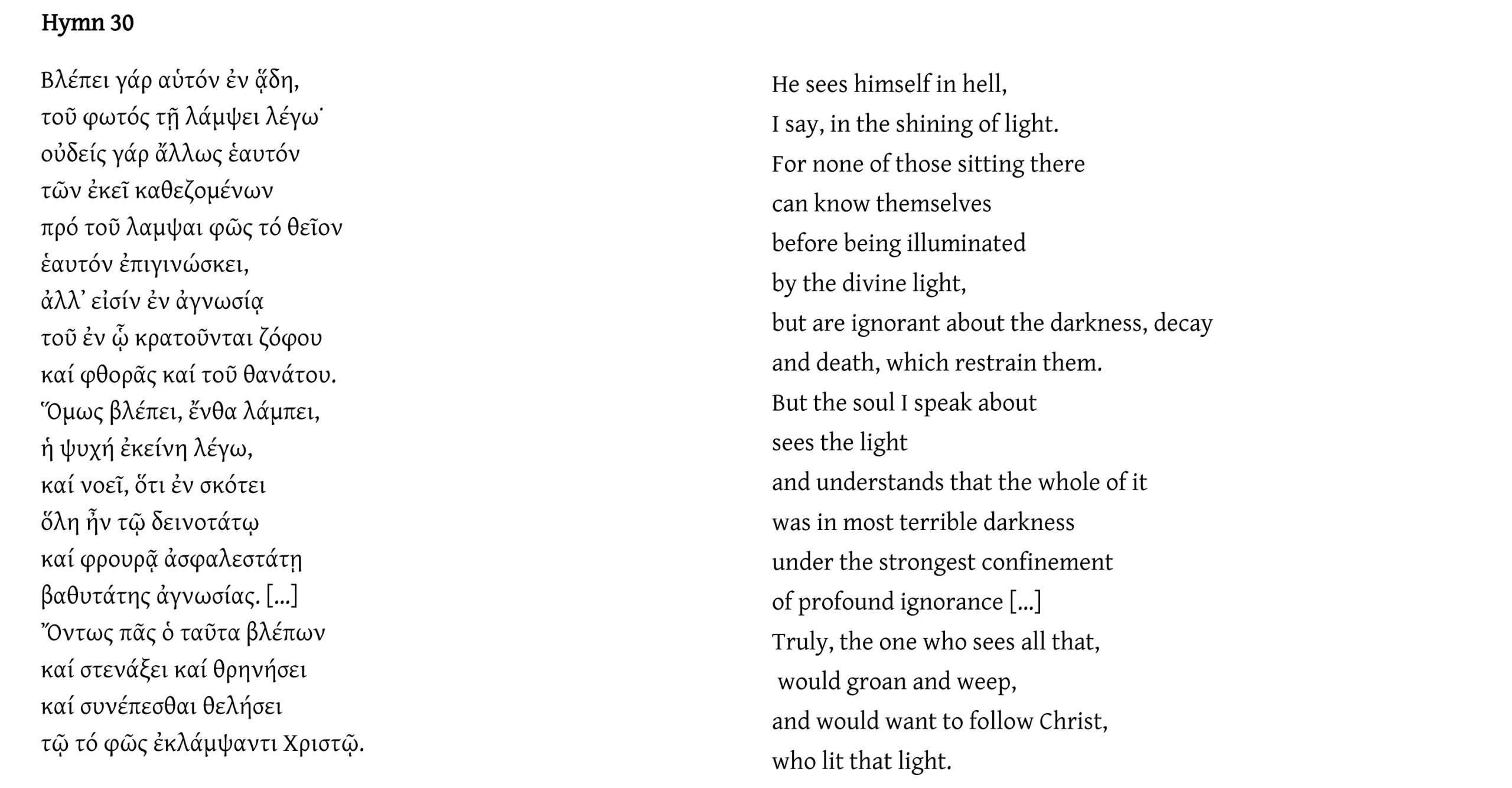