One of the most prominent and intellectual figures of modern Turkish poetry, Hilmi Yavuz is well-known not only for his poems but also his fictional narratives, as well as his writings on philosophy and culture. Defining ‘tradition’ as ‘finding out the constant in ongoing and everchanging things’, Hilmi Yavuz has built his poetry on the principle of reconstructing the Turkish poetic tradition. For him, poetic tradition is a web of relationships including a variety of literary figures and traditions. Ahmet Haşim, Yahya Kemal, Asaf Hâlet Çelebi, and Behçet Necatigil are among the poets he took his inspiration from. In his early poetry, his thematic centre piece was history, for which he successfully brought together ‘narrative’ and ‘expression’ in poetic language. However, arguing that philosophy and poetry are intertwined in mysticism, he explored how they are synthesised in poetry. In his poetry, language and aesthetics are emphasised; the meaning is not easy to grasp – the reader has to strive for it – and the verses are open to multiple readings. Ambiguity is a key term for defining his poetry.

‘The identity sonnet’ reproduced here is an ideal example of Hilmi Yavuz’s poetic oeuvre. The poem is the last piece of a trilogy composed of thirty pieces: Ayna Şiirleri (Poems for Mirrors). The thirty poems can also be interpreted as mirrors, and as symbols for the thirty birds which form the Simurgh, a metaphor for God in Sufi mysticism. ‘The identity sonnet’ is based on the idea of ambiguity (who is ‘the other’ in the poem? The One, who is the object of the Islamic mystical notion of unity of being? Or the protagonists of an appropriated Echo and Narcissus story?).  Despite this ambiguity, it is clear that the poem shows the process of the poet dissolving in the poetic traditions and breaking free from his ‘skin’, i.e.,  the restraining and monotonic cultural identity. In the end, the poet is left with the essence of the poetry: the Neoplatonic symbols of the mirror and unity. The poem is discussed by Neslihan Demirkol and Mehmet Kalpakı in their chapter ‘The New Image of the Beloved in the Old Mirror: Reflections on the Neoplatonic Tradition in Modern Turkish Poetry’ (see FoI, 443-4). 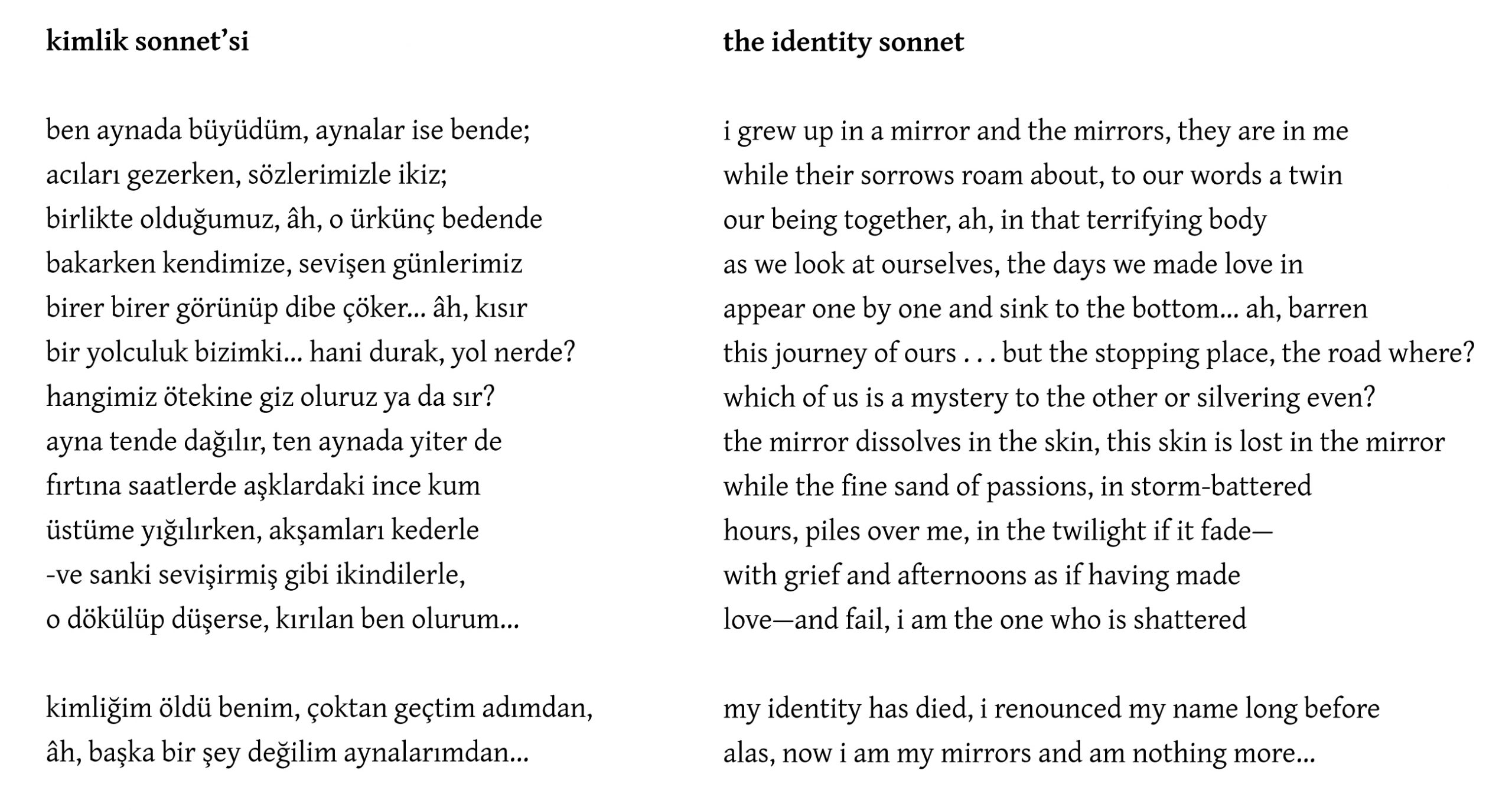