One of the great Christian intellectuals of the fourth century, the Cappadocian Father Gregory of Nazianzus, had a thorough grounding in classical rhetoric and philosophy and was a voracious reader of traditional Hellenic –and, therefore, as well pagan– literature. As the architect of the ennoblement of Christian language and its new message by recourse to the old literary forms, his copious oeuvre is no less valuable for Greek literature than for Christian theology, where he distinguished himself as defender of the Nicene Trinitarian doctrine (Ruether 1969). Gregory is considered a saint by the Catholic Church, as well as by the Orthodox and Eastern Churches which count him as one of the Three Holy Hierarchs, along with Basil of Caesarea and John Chrysostom.

Among the literary genres Gregory cultivated in particular was letter writing. He produced excellent compositions which became models of epistolary style for later generations. He also stood out for the eloquence his rhetorical writings which was undoubtedly due to his classical training with renowned pagan teachers. At a time when the discourses of sophists were being replaced by the sermons and homilies of bishops, Gregory studied under famous pagan orators such as Himerius, as well as with Prohaeresius who probably was a Christian. Conversion to diverse intellectual and spiritual factions was a daily phenomenon in the fourth century.

Above all, Gregory must be rightly considered the founder of Christian Greek poetry. We owe him the most complete adaptation of the Greek meter to Christian themes (Simelidis 2009). His poems form a wide and highly varied corpus of thousands of verses – some probably missing – that deal with autobiographical, religious, and secular themes, in various lyrical forms, from epigrams to imitations of archaic Greek poetry. Collated in volume 37 of the Patrologia Graeca by Migne, his poetic work is traditionally divided into carmina dogmatica (38 poems), carmina moralia (40 poems), autobiographical poems (99 poems), poems about his friends (8 poems), epitaphs (129 poems) and epigrams (94 poems).

As illustrated by the examples cited below, and noted by David Hernández de la Fuente in his chapter ‘Neoplatonism and Poetics in Ancient Greek and Byzantine Literature’ (FoI, 53-92), Gregory’s poetry bears the imprint of Neoplatonic mysticism. In the first excerpt, for instance, the souls ‘joining the sound of many voices’ clearly evokes the ‘many-toned exultation’ of the Muses in the opening lines of the Delphic oracle on Plotinus’s soul which is also cited on this website.

Also reproduced herunder is the beautiful and patently Neoplatonic Hymn to God which was traditionally transmitted among Gregory’s theological poems. The fact that some of its verses are quoted in Olympiodorus’s Commentary on Plato’s Gorgias casts doubt on Gregory’s authorship. Modern scholars have attributed the hymn alternatively to Proclus, to Dionysus the Areopagite (Sicherl 1988), or to an anonymous Christian Neoplatonist of this period. In any case, it is remarkable to find it among the poetic corpus of Saint Gregory ‘the Theologian’. The work reflects the common Neoplatonic discourse on prayer and meditation on divinity which was shared both by Pagan and Christian Neoplatonists at the time (Timotin 2018). 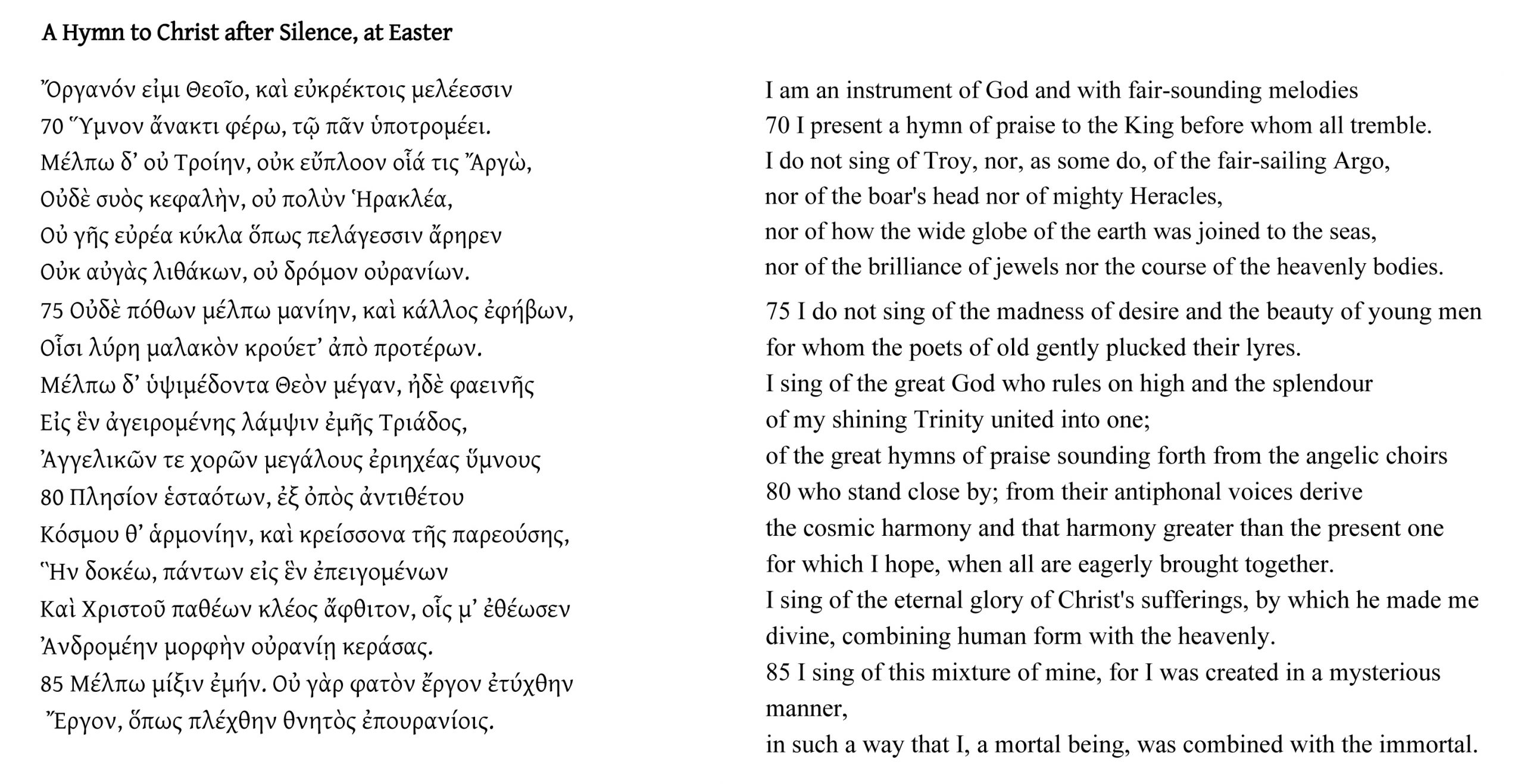 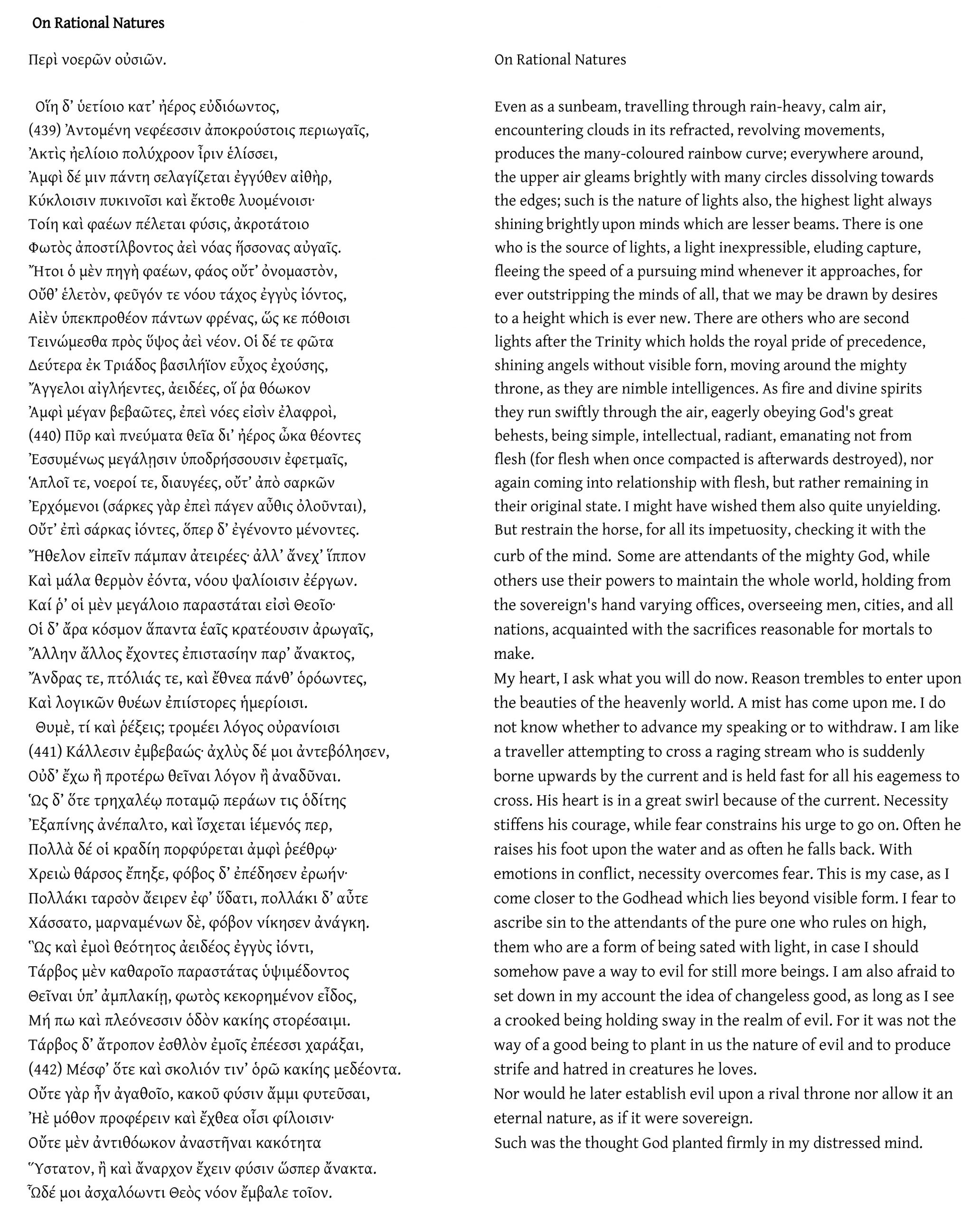