Perhaps the earliest example of Neoplatonic Poetry in Greek is the Oracle on the soul of Plotinus cited by his disciple Porphyry and reproduced here with the translation of Stephen MacKenna.

The ideological relevance of oracles as sources for pagan Neoplatonism in their controversy with Christianity is difficult to underestimate. It is illustrated by Porphyry’s lost work On the Philosophy of Oracles, about which information has come to us mainly through the writings of some Church Fathers. According to Eusebius (V 36 5), the text was written against the Christians (Wilken 2003, 126-163). The insistence of the last pagans on using oracular language also for philosophy went hand in hand with the interest that the traditional Apollonian diviner at Delphi began to arouse also among Christian writers in an atmosphere of ideological confrontation (Nieto Ibañez 2010).

In Late Antiquity, there was a special emphasis on the study of oracular poetry in diverse Neoplatonic schools, from the School of Plotinus and Porphyry in Rome, to that of Proclus in Athens, not to mention that of Iamblichus in Syria. In this ideological and literary context, at the crossroads between religion and poetry, the Oracle on Plotinus’s soul is an example of outstanding interest. According to Porphyry it constitutes the response given by the Oracle of Delphi to a consultation on the destiny of Plotinus’s soul submitted to it by Amelius.

The parallelism with the Chaeremon’s consultation of the Oracle on the wisdom of Socrates is evident and emphasized by Porphyry himself. Both inquiries concern wise men with a special relationship to the mantic and the divine spheres (on the flight of the soul towards the divine in the Greek tradition, cf. Gil 1966, 130-131). The Oracle’s verdict on Socrates has not survived, but with respect to Plotinus Porphyry seemingly provides us with Apollo’s complete answer as delivered by Pythia. Composed in hexameters in keeping with tradition, it represents a metaphysical, not to say mystical, portrayal of the ascent, or rather the reversion, of Plotinus’ soul to the One (Brisson & Flamand 1992, 565-602).

Interestingly, both the Oracle and Porphyry (op. cit. 23.3-4) dwell on Plotinus’ exemplary characteristics as a divine teacher, who disregarded his physical needs and hardly slept in the world of the living. For him, dying meant but the true awakening of the soul to the higher realities. The great founder of the Neoplatonic School is praised along with other maîtres de verité, mythical or philosophical, as a true daimon, a privileged connoisseur of the paths of the intelligible world.

Whether it is an authentic or embellished oracle or, perhaps, a composition by Amelius, or by Porphyry himself, it must be viewed as a key piece of evidence – perhaps the oldest – to demonstrate the significant status of poetry in the Neoplatonic School. In the course of time, the latter gave rise to a deeply rooted tradition of oracular and hymnic poetry of which unfortunately only few examples have survived (Agosti 2009, 35). For details, see David Hernandez de la Fuente’s chapter ‘Neoplatonism and Poetics in Ancient Greek and Byzantine Literature’ (FoI, esp. 53-74).

As for the author of the Life of Plotinus, Porphyry (c. 234-305), he was a Syrian from Tyre who originally bore the Semitic name Malchus. During the reign of the Emperor Gallienus he became Plotinus’s closest disciple in Rome. Porphyry collated Plotinus’s writings and edited them in the form of the Enneads, together with a biography of his teacher. He drew on Plotinus’s doctrines in his own work and thereby promoted the adaptation of Platonism to Late Antiquity. In the process he gave the old Academy more mystical nuances. This can be seen in his view of Pythagoras as a precursor of the Late Antique theios aner (“divine man”) with religious aspirations, and by his insistence on presenting the philosophical path as an ascetic way of life, thereby equating his teacher Plotinus with one of those divine men of the mythical tradition.

After citing the oracular poem, Porphyry gives his verdict on his master, before adding a note on his own philosophical quest:

‘Good and kindly, singularly gentle and engaging: thus the oracle presents him, and so in fact we found him. Sleeplessy alert – Apollo tells – pure of soul, ever striving towards the divine which he loved with all his being, he laboured strenuously to free himself and rise above the bitter waves of this blood-drenched life: and this is why to Plotinus  – God-like and lifting himself often, by the ways of meditation and by the methods Plato teaches in the Banquet, to the first and all-transcendent God – that God appeared, the God who has neither shape nor form but sits enthroned above the Intellectual-Principle and all the Intellectual-Sphere […] To this God, I also declare, I Porphyry, that in my sixty-eighth year I too was once admitted and entered into union’ (Vit. Plot. 22-23; Plotinus, 1991, cxxi-cxxii). 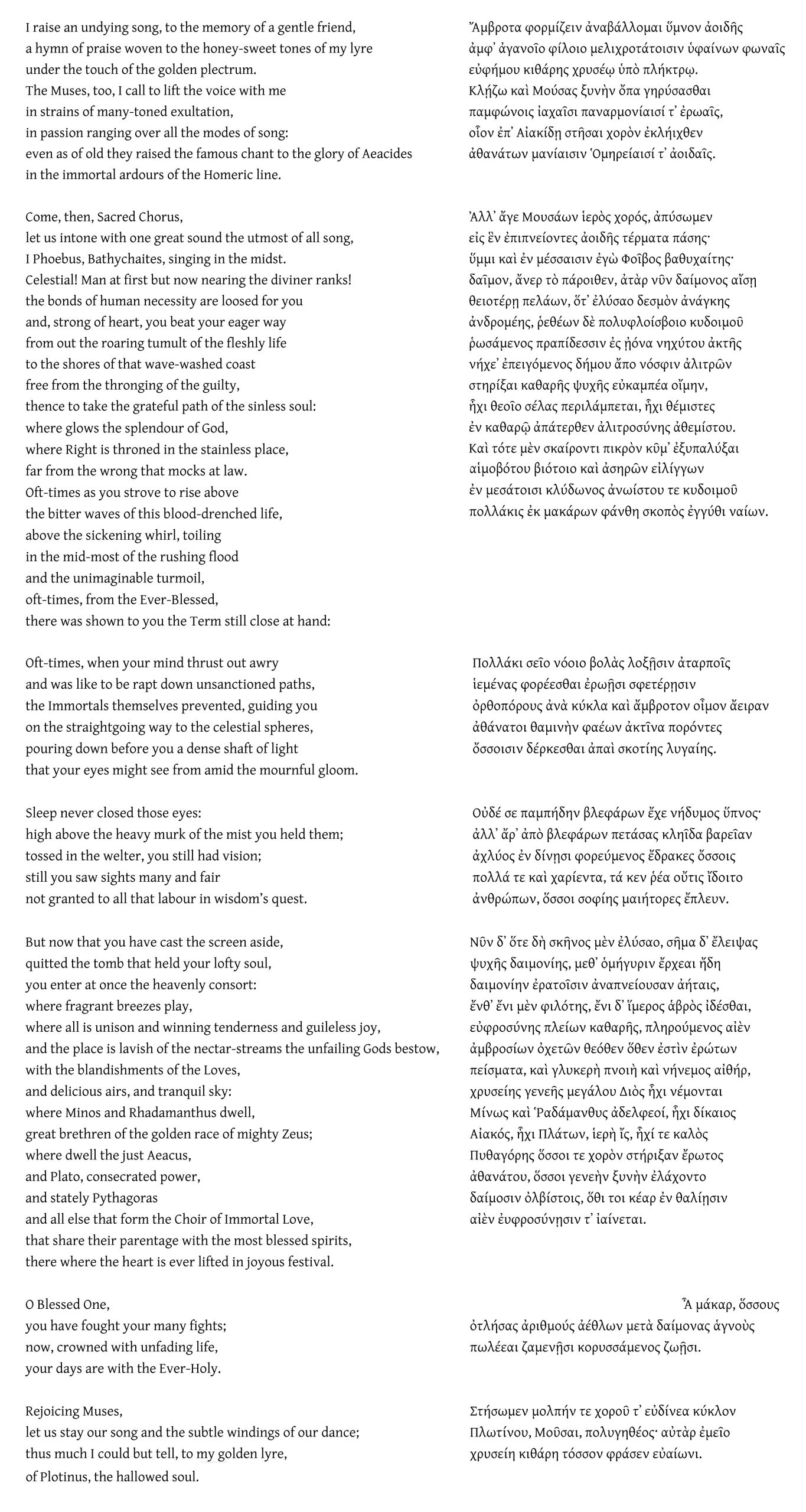