Asaf Hâlet Çelebi is a unique figure in modern Turkish poetry. Starting at an early age, he learnt Persian and French from his father, who was steeped in Sufi mystic literature. Çelebi was also trained in Ottoman classical music by important figures of his time. He was fluent in Arabic, Hindi and Sanskrit, and thus had direct access to the sources of Eastern mystical philosophy. He never limited himself to Islamic mysticism. He wrote books about Eşrefoğlu Rûmî, Jalâl ad-Dîn Mohammad Rûmî, Gautama Buddha and Buddhism. Through his deep and thorough understanding of these traditions of mysticism he managed to construct a revised and reinvented mystical cosmos in poetry without referring to the old poetic forms. He did not hesitate to employ Buddhist terms in his poetry either. However, he adopted a simple language, reminiscent of Anatolian folk poets, and thus made his work accessible to many readers and managed to convey the spiritual depth of the meaning without getting lost in the labyrinths of grandiloquence. Although some of the expressions which he used in his poetry, e.g. om mani padme hum, caused some taunting from his contemporaries, such as Orhan Veli, for being nonsense, he stated that not everything in poetry is to be understood. He argued that sometimes understanding the meaning of a foreign word or an expression overshadows the beauty of the form and the harmony of expression. He also added that despite being conceived as nonsense, these expressions were essential for creating the overall atmosphere and meaning of the poem.

The protagonist of the poem entitled ‘Cüneyd’ is a Sufi figure of the ninth century, Junayd of Baghdad. The simplistic style of the poem, where the mystical cosmos is constructed without using mystical terminology, reminds the reader of the famous Turkish folk poet, Yunus Emre. It narrates the journey of the soul to fanâ’ fî-Allâh or Nirvana. The poem is discussed by Neslihan Demirkol and Mehmet Kalpakı in their chapter ‘The New Image of the Beloved in the Old Mirror: Reflections on the Neoplatonic Tradition in Modern Turkish Poetry’ (see FoI, 441-3). 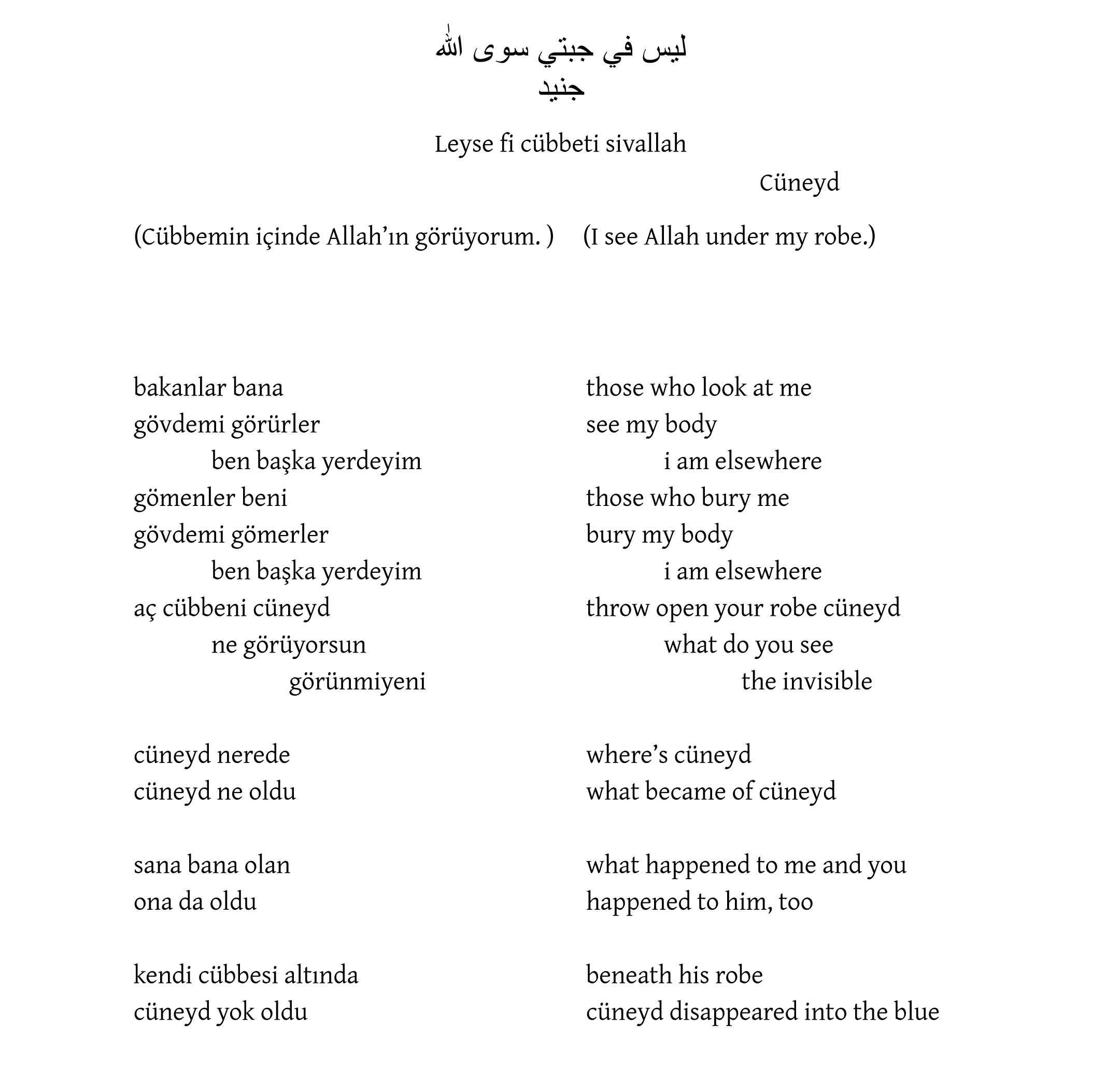